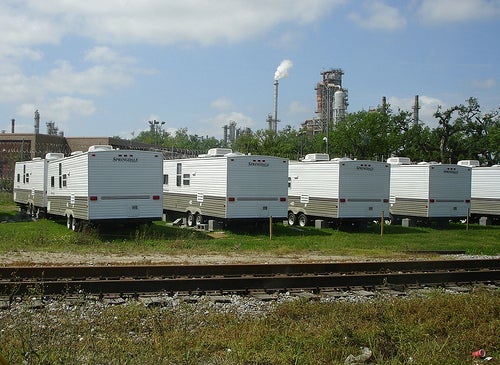 As the third Spring since hurricane Katrina approaches, officials at the Centers for Disease Control today urged FEMA to move the 114,000 people who still live in “temporary” travel trailers as quickly as possible. The problem? Dangerously high levels of formaldehyde—a known carcinogen and respiratory irritant—which will only increase as the heat takes its toll on unstable building materials.

Between late December and January, the CDC tested the air inside a random sampling of some 500 trailers across Mississippi and Louisiana. Most homes have formaldehyde levels of about 15 parts per billion; the trailers averaged 77 ppb, some reaching as high as 590. These drastic findings, however, are not exactly news. In 2006, the Sierra Club, and subsequently FEMA itself noted the elevated levels. Since then, two summers have passed—two cycles of materials not intended to house humans in any long-term manner being exposed to heat, leeching out a toxic chemical.

Here is what FEMA Administrator David Paulison said in today’s press conference: “Hindsight is 20-20. We can look back and say, ‘Yeah, maybe we should have did something differently.'” Hindsight may be 20-20, but considering how long this has been a known issue, it’s increasingly apparent that, for whatever reason, FEMA is just playing blind.