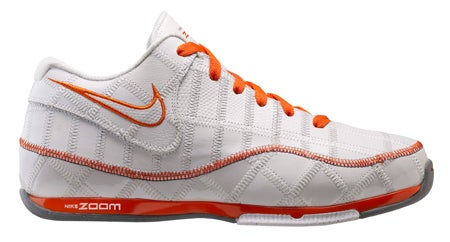 Former NBA MVP Steve Nash is known for many things: his Canadian citizenship, his diminutive stature for a basketball player (6’3 on his toes), even his now-shortened locks. But never has the term “trash talk” been associated with him—until now.

During Sunday’s All-Star game, Nash stepped onto the court sporting a new pair of Nike Trash Talk shoes. Built from the waste created during shoe manufacturing, Nike claims it’s the first performance shoe of its kind.

“Any opportunity to promote the environment and preserve our planet is a step in the right direction,” Nash said in a Nike press release. “I’m very excited to be one of the first athletes to wear the Nike Trash Talk. I think people will love the shoe, and hopefully by wearing it I can inspire others to try it out as well.”

A zig-zag stitch on the shoe’s upper attaches synthetic and real leather scraps, and is the primary visual sign that the Trash Talk has got something different going on. The body and sole of the shoe are made from leftover foam and rubber chunks, and even the boxes for the shoes are recycled.

The Trash Talk is the latest step from Nike, and the sporting goods industry, to attempt to get greener. Other initiatives include the reuse-a-shoe program launched by Nike in 1993 to collect worn out sneakers (from any manufacturer) for use in running tracks, basketball courts and other sports surfaces around the world. To date, Nike has collected more than 20 million kicks that would otherwise be sitting in landfills.

Competing shoe manufacturer Brooks took its own novel step by creating a midsole called BioMoGo that will degrade 50 times faster than a normal pair of sneakers. A natural additive encourages anaerobic microbes to eat the material without sacrificing performance or durability before disposal. This means old sneakers that once sat in a landfill for 1000 years will be gone in just 20 with BioMoGo.

But it takes a bit of green to go green: While Brooks says the new midsole material (available in July) won’t come at a premium, there’s also no promise of discounts. Nike’s Trash Talk is available at limited locations now and will retail for $100.