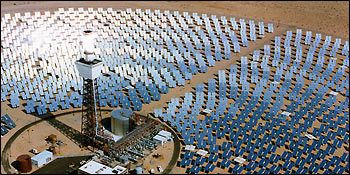 The last few years have seen tremendous growth in solar thermal power plants—huge arrays of mirrors that concentrate the sun’s energy onto a liquid which then boils and spins a turbine. The process is generally more efficient than using photovoltaic panels, and new solar thermal plants under construction in Spain and Australia will be among the largest capacity solar plants in the world. Old-fashioned PV panels were starting to look archaic, or at least suitable only for small-scale projects like roof instillations. But not all PV panels are created alike.

On Monday, the Hong Kong–based CLP power group announced it will invest $270 million in what will be the world’s largest solar plant. Once the plant is completed in 2013 in Victoria, Australia, it will generate 154MW of electricity, enough to power 45,000 homes. Yet they’re not using solar thermal. Instead, they’re using a similar method called concentrated photovoltaic. The technology is much like solar thermal in that it uses a huge field of mirrors to concentrate light, but instead of heating a liquid to generate steam, this concentrated light illuminates a high-efficiency PV panel that then converts the energy into electricity.

Typical photovoltaic panels are made of silicon, and only convert about 10 to 15 percent of incoming light into energy. One way to attack silicon’s cost/efficiency problem is to lower the cost, the strategy of thin-film firms like our 2007 Innovation of the Year winner Nanosolar. The other is to up the efficiency. Using technology that it considers proprietary (i.e., they won’t say more), Solar Systems, the Australian company building the new plant, has created solar panels that triple the efficiency of silicon. Interestingly, since the concentrated sunlight at these panels is so intense, the steel-backed panels need elaborate cooling systems to keep them down to a 60°C operating temperature. With only a few small panels working at high efficiency, the company can keep costs down and power output high.

But don’t count solar thermal out. Racing the Australian project for the title of the world largest will be Mojave Solar Park, a 554MW behemoth in California’s Mojave Desert that will supply power to 400,000 homes.