Climate Change—Don’t Blame It on the Sun

(And forget about those crazy space-based solar mirrors) 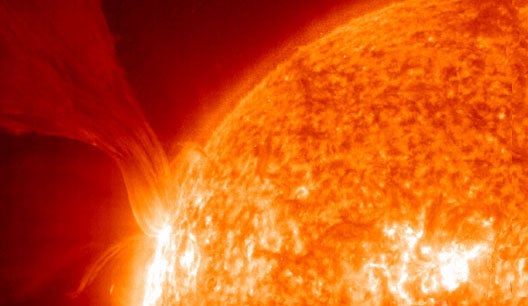 Sallie Baliunas, an astrophysicist at the Harvard Smithsonian Center for Astrophysics, is pointing to a slide called “Interdecadal Magnetic Variability Berillium 10.” It’s supposed to communicate something about the relationship between the sun’s intensity and climate change. All I see is a collection of squiggly lines. It could be an EKG or a seismograph test. The man sitting next to me appears to be equally lost. He’s snoring. The woman next to him is staring at her shoelaces.

The lecture is in pure astrophysicist-ese. I intercept bits of English: cosmic rays, warming earth, getting worse, very bad. Then Casper Ammann, a paleoclimatologist at the National Center for Atmosphere Research in Boulder, Colorado, throws up a new slide. This one makes sense. It shows an easy-to-understand bar graph that illustrates the negligible effects of solar radiation on climate change compared with the effects of human-driven greenhouse gases, which appear on Ammann’s graph as a green line that dramatically spikes upward beginning in the 1960s. This comparative data is significant because the intensity of cosmic irradiation is approaching an all-time historic high, and scientists are eager to know what it means for our already toasty planet. Some have even proposed launching mirrors into space to reflect sunrays.

But this radical geo-engineering scheme draws Ammann’s skepticism, and even laughter from the crowd. At best it would provide a temporary masking effect, Ammann says. Bottom line: Don’t blame the sun. The best way to turn down Earth’s thermostat is to stop emitting CO2.