Step 7: Ride the Waves for Watts

A sea change, indeed, with tidal turbines and generators 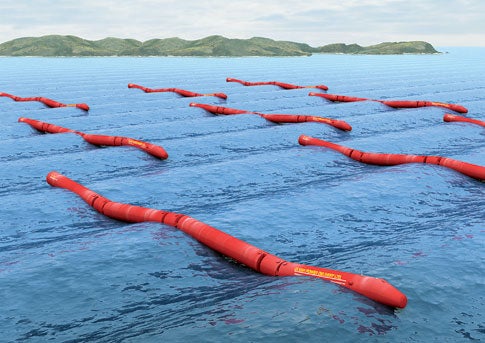 The u.s. has some 2,100 terawatt-hours of near-shore wave power, about one eighth of which could be developed with minimal environmental impact, according to a recent marine-energy study for the electric industry. That amount of usable energy is equivalent to the output of all our existing hydroelectric dams.

As in most renewable-energy arenas, the Europeans are ahead of the game. In Portugal this summer, workers are installing an offshore wave-energy converter called Pelamis [above]. The snake-like chains of steel tubes will float semi-submerged, three miles out to sea. By 2008, the system of 400-foot tubes will power an estimated 15,000 homes.

Water power´s advantages over wind include its lower profile (aesthetic concerns have derailed wind projects in Vermont and Massachusetts) and the fact that currents are 10 to 40 times as energy-dense as wind. “In terms of technology, these new hydrokinetic systems are coming of age faster than wind did,” says Roger Bedard of the nonprofit Electric Power Research Institute.

The technology for tidal turbines-essentially windmills operating in a much denser medium-is developing particularly quickly. Eight feet below New York City´s East River, six turbines driven by the channel´s tidal currents will begin producing electricity this summer. The slow-turning propellers will generate 525,000 kilowatt-hours their first year. Depending on the results of an 18-month trial, enough turbines could be added to produce 26 million kilowatt-hours and power 8,000 homes. That´s hardly a dent in Gotham´s energy consumption, but experts say it´s the technology, not the size of the project, that´s exciting. This will be the world´s first power-producing tidal turbine farm, a prototype that could lead to a steady, nonpolluting energy source.

“We call it lunar power,” says Virginia Tech oceanographer George Hagerman, who points out that tides are far more predictable than the rain and snowmelt that feed dam-based hydroelectric generators. “The wind may or may not blow, but you can predict the moon and tide 1,000 years from now.”