Make power where we use it 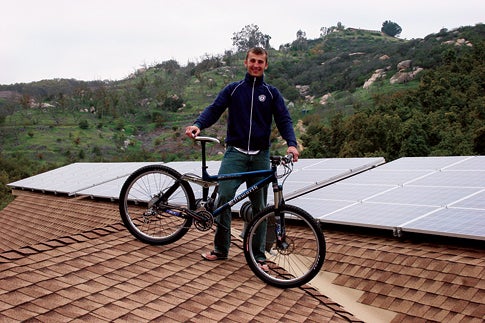 Existing grids were designed to deliver a one-way flow of energy from a central source to all users. A better system is “distributed generation,” in which power sources like wind and solar are located at or near homes and workplaces. Those sources are linked with sophisticated digital dispatch and control mechanisms that route energy traffic during peak and nonpeak hours for top efficiency.

When Tony Ellsworth began planning a new San Diego home for his custom-bike company, Ellsworth Bikes, he aimed from the get-go to minimize the project´s impact on both his bank account and the environment. A geothermal system heats and cools the building, and electricity is provided by rooftop solar cells, which feed excess energy back into the local electricity grid to be credited at full retail value. “It´s such a no-brainer,” Ellsworth says. “Far better than building power plants and importing foreign energy.” He expects to recoup the cost of the solar system#&8212;$28,000 after rebates#&8212;in four years. And his green factory even helps him cope with the stress of running a small business. “I deal with the low moments by going out back and watching the electric meter run backward,” he says. “That always puts a smile on my face.”