Turbines are getting stronger, lighter, bigger 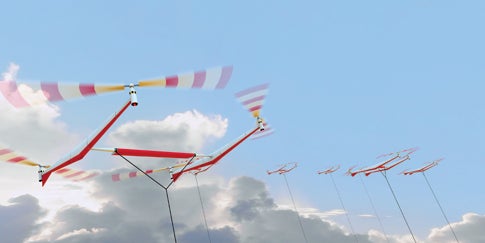 Atop a High plains plateau just south of Boulder, Colorado, four rows of test turbines stand against a backdrop of snow-covered Rockies, the 150-foot blades twirling slowly in a light breeze. “If you were siting a commercial wind farm, you wouldn’t put it here,” says Sandy Butterfield, a chief engineer for the U.S. Department of Energy’s National Renewable Energy Laboratory. “But it’s the perfect location for a test site, because we get gusts up to 100 mph. They tell us pretty quickly which designs can take a beating.”

In 1991 a government wind-resources inventory concluded that three states-Kansas, North Dakota and Texas-had enough available, harnessable wind energy to meet the entire country´s electricity needs. Today that finding looks like an underestimate. The price of wind energy has dropped by 85 percent over the past 20 years-in large part due to increased turbine efficiency, a result of work by labs like the one in Colorado. In many parts of the country, electricity consumers can opt to purchase wind-generated power. Their rate is often locked in for years, allowing residents to essentially make a long-term bet on the cost of wind verses traditional polluting sources like coal. Those bets are already starting to pay off, with wind buyers in Colorado and Texas, for example, seeing lower utility bills earlier this year. As fossil-fuel costs rise, the savings could become much greater.

For the past several decades, the development of stronger and more lightweight turbine blades has allowed for ever bigger and more powerful machines. The largest of them are taller than the Statue of Liberty (which, incidentally, is now powered by wind-generated electricity). More recently, turbine advances have been in matching the machines´ design to specific wind conditions. Turbines for the Plains states, for instance, are built differently than those designed for the hurricane-prone Gulf Coast.

One of the technology´s primary drawbacks-the variable nature of the wind-has been mostly overcome by more-precise forecasting, and the high-profile Nimby (“not in my backyard”) fights that have cast doubt on whether industrial-scale wind development will be accepted in many areas are beginning to be answered by a growing Pimby-“put it in my backyard”-chorus. In the Midwest, farmers are clamoring for a chance to lease quarter-acre lots to electric companies paying annual fees of $2,000 to $4,000 per turbine.

Little wonder, then, that some wind-technology developers are reaching for the sky. Sky WindPower Corporation is developing a flying electric generator [above] that would autorotate at 15,000 feet, tethered to the ground with an electricity-conducting cable. The design will have to overcome challenges posed by anchoring and maintenance. But no one disputes that high-blowing breezes are the strongest, smoothest and most energy-rich on the planet.