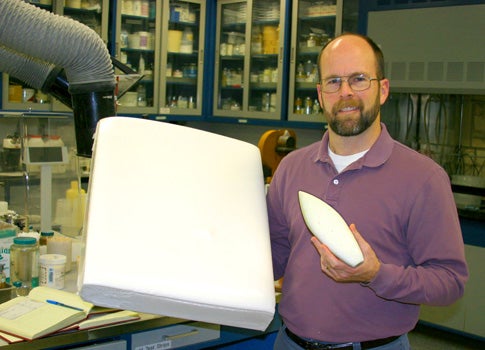 The surfboard industry is going nuclear–and greening up in the process. As early as this summer, boards made from foam designed to protect the electronics and transistors in nuclear warheads could be available at your local surf shop, thanks to LeRoy Whinnery, an enterprising scientist at Sandia National Laboratory. When Whinnery heard the news last December that the world’s largest maker of surfboard blanks was shutting down, he realized that the insulating foam he’d been working on for nine years could help fill the gap, with benefits for both surfers and the environment.

TufFoam, as Whinnery’s invention has been dubbed, is made without the carcinogenic chemical toluene di-isocyonate, a danger to workers and the local environment, and without CFCs, powerful agents in global warming and ozone-layer destruction. Most surfboard foam is still made with both, and the heavy EPA restrictions on TDI use were one of the reasons that industry giant Clark Foam gave for closing its doors.

A small San Diego foam company, Petritech, licensed TufFoam from the weapons lab in April and believes that it will produce better surfboards. “The primary failure mechanism for boards is that they snap, and TufFoam is significantly stronger than the TDI foams we’ve tested it against,” says Petritech CEO Dave Sheehan. “Plus, we think surfers will appreciate the cleaner chemistry.”

So is Whinnery planning to field-test his invention? “My wife is a more serious surfer than I am,” he says. “She called to reserve the first TufFoam board a long time ago.”