10 ways people hunt and fish without bullets or hooks

From using spider webs to catch fish to netting birds from cliffs, these \hunting and fishing skills are pretty impressive. 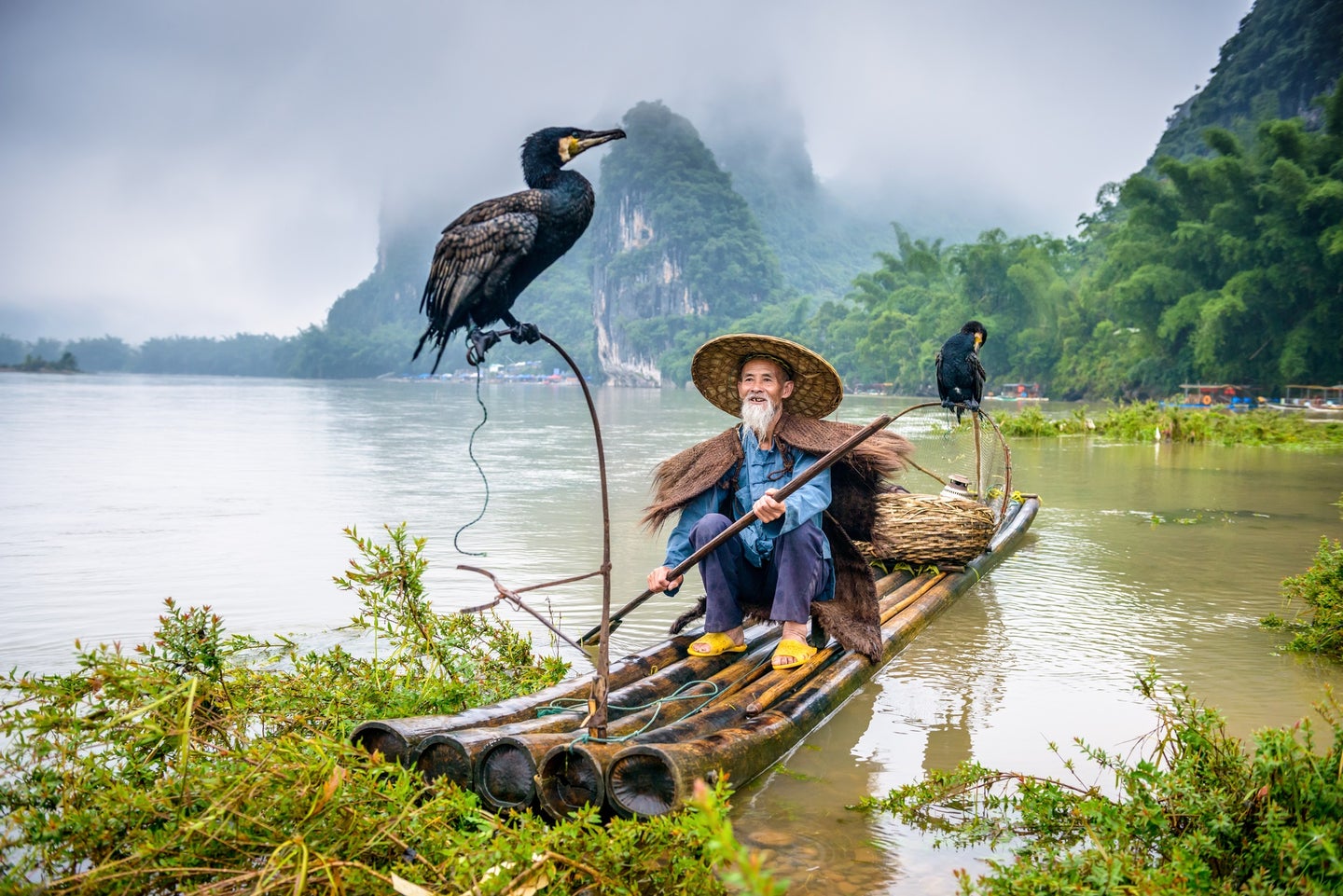 Cormorant fishing is a millennia-old tradition in China and Japan. sepavone/Deposit Photos
SHARE

Think noodling giant catfish and decoying antelope with cardboard cutouts are far out? Those unconventional tactics seem almost tame when compared to the inventive, unusual, and downright ingenious hunting and fishing techniques perfected throughout history. Whether passed down through the ages or developed in modern times, these outside-the-box approaches to putting dinner on the table have one thing in common: They work.

Fishermen in the Solomon Islands gather spider webs that they fashion into lures. Trailed along the surface of the water beneath kites, these worm-shaped lures attract strikes from needlefish—whose narrow mouths make them impossible to catch with hooks. When the kite dips, the fishermen haul in the needlefish. The strong web snaggs the fish’s sharp teeth and rough scales—no hook needed.

Talk about brass: Dorobo tribesmen from Kenya use a bold hunting tactic that’s as simple as it is daring. After tracking lions to a fresh kill, they walk right up to the feeding pride and claim a share. Intimidating lions (kleptoparasitism, as the technique is called by biologists who documented several examples of the practice in the African Journal of Ecology in 2009) is just one of the ancient hunting methods still practiced by these modern-day hunter-gatherers in the grasslands of east Africa.

Iceland is the only country in the world that allows hunting for Atlantic puffins—the black-and-white seabirds with red-and-yellow striped bills that form large colonies along the country’s coastal cliffs and islands. Shotgunning from boats can bring hunters 50 to 100 birds in a day. But a more traditional approach is called lundaveiðar. Hunters use long-handled triangular nets (háfur), often from precarious cliffside perches, to sweep flying puffins out of the sky. The long-standing tradition on Iceland’s Westman Islands is thought to date back to Viking times. Unfortunately, declines in puffin numbers due to climate change and other human activity have led to season cutbacks in recent years.

In England, where rabbits cause an estimated £1 million in agricultural damage annually, the animals are designated as pests under a 1954 law, which charges residents with a “continuing obligation to kill or take any wild rabbits living on” their land. Trained ferrets are sent underground to flush rabbits from their burrows, and hunters can use dogs, shotguns, birds of prey, or nets staked across burrow exits and around the perimeter to bring the bunnies to bag. British law requires that rabbits caught in nets must be quickly and humanely dispatched.

Humans can’t outrun wild animals, but we can outlast them. Our early ancestors employed persistence hunting—chasing speedy game for hours in the heat of the day—to turn human endurance and thermoregulation to their advantage. Animals that easily outpace us in short sprints become too overheated and exhausted to continue over long distances, making them easy targets for arrow or spear.

Modern hunter-gatherers in Africa’s Kalahari Desert still use the technique to run down kudu, eland, gemsbok, and other antelope. Even the fastest land mammal is vulnerable to the tactic: In 2013, Kenyan villagers chased down a pair of cheetahs that were killing their goats. The four-mile pursuit ended with villagers capturing the cheetahs alive and handing them over to Kenya Wildlife Service.

Combine elements of wakeboarding, hand-netting, and basketball with the Asian carp’s propensity for launching itself airborne at the sound of an approaching motorboat and you have skarping. Its effectiveness as invasive species control may be debatable, but its value as pure gonzo fun looks to be a slam dunk.

Colonist Robert Beverly, in his 18th-century book The History and Present State of Virginia, in Four Parts, described how Native Americans disguised themselves in animal heads and skins to stalk deer and buffalo. White settlers adapted the tactic by training their horses “to walk gently by the Huntsman’s side, to cover him from the sight of the Deer.” A century later Merriweather Lewis documented a similar technique in the Blackfoot Bison Jump.

Wearing a buffalo head and pelt, the swiftest and most daring member of a tribe positioned himself “at a convenient distance between a herd of buffaloe and a precipice proper for the purpose,” Lewis wrote in his Corps of Discovery Expedition journal. The remaining hunters then chased the buffalo toward the decoy, who led the stampeding herd toward the cliff. The decoy would then jump over the edge into a crevice while the buffalo fell to their death.

Practitioners of this centuries-old ritual deploy trained cormorants—surface-diving water birds renowned for their fish-catching skills. A string tied around the bird’s neck prevents it from swallowing large fish, allowing the handler to retrieve the bird and claim the catch. Once practiced in ancient Egypt and elsewhere around the world, cormorant fishing now survives mostly in China and Japan, where the world’s most famous cormorant fishery, on Gifu prefecture’s Nagara River, has continued uninterrupted for 1,300 years. Here “usho” in the employ of Japan’s royal family don traditional garb and use flaming lamps to attract fish at night, each fisherman managing as many as a dozen cormorants at once in a balletic display that attracts a large tourist following.

Flounder trampers walk barefoot in the waters of Scotland’s Solway Firth and other shallows on a receding tide, when flatfish lay buried on the bottom. Once they trap a fish underfoot, trampers pull it from the water by hand. There is even a Flounder-Tramping World Championship, which was started in the early 1970s in Palnackie and was held as recently as 2015. The competition awards prizes and attracts hundreds of trampers in a peculiarly Scottish national holiday.

Many indigenous tribes around the world, including the Cherokee Indians in the southeastern United States, used blowguns made of hardwoods or bamboo to propel clay pellets, darts, or seeds with enough force to bring down small game like rabbits, birds, and even monkeys.

Outlawed in California, Massachusetts, and the District of Columbia, blowguns are legal in much of the remainder of the U.S. Blowgun sporting leagues compete around the world, and a governing body, the International Fukiyado Association, hopes to someday make blowgunning an Olympic sport.