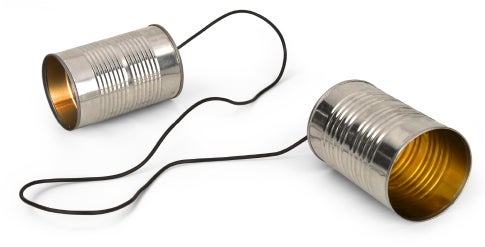 Like many Americans today, the economy is currently using me as its punching bag. So, I’ve decided to take a hard look at my monthly expenses and lop off anything I think I can live without—a financial amputation before gangrene sets in, if you’ll permit the metaphor. First in the crosshairs is my landline; I’m wondering if I can completely replace it with the much heralded and much cheaper Internet-based phone service, Skype.

People are ditching landlines for cellphones at a record pace, and if the Web has conditioned us to hold one truth to be self-evident, it’s that anything and everything can be had for free or practically free. So why is my phone bill still so damn expensive?

I ditched the telco long ago for what I thought was a better option: VOIP supplied by my cable operator, Time Warner Cable. In fact, I succeeded only in trading one evil for another. Competition from cellphones and VOIP has done very little to bolster quality or lower prices when it comes to home phone service. That’s because both the phone and cable companies are dinosaurs clinging to antiquated business models that prey upon people’s resistance to change. A company like Time Warner can offer a meager discount to the telco with absolutely no improvement in quality. They’ve got us drinking the Kool-Aid believing there’s nowhere else to turn.

That’s why, when Skype came along a few years ago, I stayed away from it. There’s no way it’ll work as well as my landline does, I assumed, plus, it’s probably really confusing—an early adopter toy that only a hardcore technophile would ever have the patience to put up with (you know, the same people who install Linux just to be different). But, now I’m ready to give it a shot. With a graphical user interface (GUI) overhaul currently in public beta and some exciting new Skype phones hitting the market, the timing seems right.

It’s amazing how quickly a dwindling bank account can change your perspective.

Including voice mail and the luxury of keeping my number privately listed, my landline comes in at $33.45 per month. Skype to Skype calls are free, but if I want to call phone numbers I need to subscribe to a service called SkypeOut. If I want phone numbers to be able to call me, I need to pay for an online phone number. If this sounds confusing, it’s really not—the Skype website holds your hand through the whole process. When all is said and done, I’m paying a total of $6.95 per month for a package equivalent to my landline set-up. Skype is already tugging at my heartstrings . . . but will it work as well as my regular phone does?

Within 15 minutes of signing up, I’ve got the client installed and my contacts imported. If you’ve ever used an instant messenger, the Skype client will look familiar: Contacts are all listed in a little window and double clicking on them initiates a call, which I use a headset for. If a contact is also a Skype user, I can text, video or voice chat with them. I can also send text messages to phones. Easy peasey.

While I choose to set up a voicemail box, I could just as easily have Skype calls forwarded to my cellphone instead. Since I’m paying for an online number, I choose to have those digits pop up on other people’s Caller IDs. So far, so good.

However, I’m not much of a headset guy. The calls I’m making sound surprisingly clear to me, but to others I sound like I’m calling from inside of a tunnel. Plus, I’m chained to my computer using software to dial numbers. The experience isn’t very phone-like, which was supposed to be the whole point of this exercise. 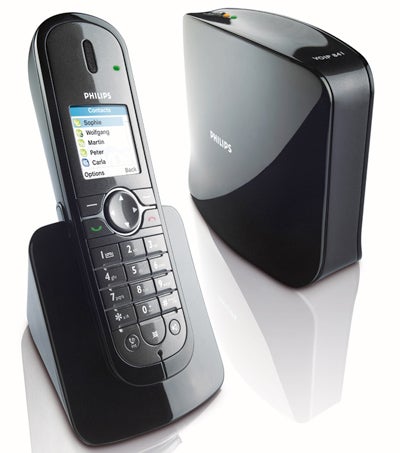 Enter the Philips VOIP841 Internet phone, which goes for $129 on Skype’s site. Without trying to sound too much like a gushing teenage girl, I have to say that I love this phone. It plugs into my home network without fuss and when I sign into Skype, my contacts are automatically downloaded. From there, I simply select a name and choose to call them with SkypeOut. I’m still in a bit of disbelief over the quality of the calls. While the headset/computer experience was less than satisfying, this phone is a real phone. And believe me, I put it though a gauntlet of punishing tests. A 10-minute call to Mom and Dad went off without a hitch. Skype even achieved the holy grail of telephony: a 36-minute customer service call to help fix a finicky printer.

If you want to test out Skype without completely abandoning your regular phone, good news: The Philips also connects to your traditional landline. When you dial a number or choose a contact, you’re asked if you want to make the call via Skype or Landline. Genius.

It would be nice if my Skype contacts and address book stayed in sync. If I add or edit a contact in the Address Book program, I’d like a way for it to automatically show up in Skype. Not happening. I also have a beef with the way the Philips VOIP phone handles contacts. After settling into Skype, I spent a nice chunk of time organizing my contacts into two groups: Business and Personal. However, when the Philips phone downloads my contacts, the groups aren’t there, requiring me to slog through hundreds of contacts to locate the one I’m after.

Skype can’t do 911. Unlike calls placed from landlines and cellphones, emergency operators can’t pinpoint a Skype caller’s location should the call drop out. Vonage and cable company VOIP services have figured out a way to deliver a type of 911, so I don’t see why Skype can’t do it either. This is a minor grievance of mine since I don’t really plan on calling 911. But who does?

Another minor point of contention would be the Caller ID. While I can have my online phone number display, I can’t display my name instead. If I was planning on using Skype for a small business, I’d like my company’s name to show up on Caller ID. That doesn’t seem like an unreasonable request.

The ability to text message friends from the Skype client is great in theory, but it’s basically useless since they can’t text me back. I can set it so that my cellphone shows as the reply-to number, but I can’t do that with the online number I’m paying for. To me, it would make perfect sense to be able to call and text people from the client using the same phone number.

The deal breaker for most people, however, will be the voicemail. It simply isn’t possible to check your Skype voicemail from a landline or cellphone. That means you need a Skype-equipped device it in order to hear your messages, which is definitely problematic if you’re traveling. Again, if I’m paying for this online number, why can’t I call it to access my voicemail box?

Finally, you may remember that just about a year ago now, the entire Skype system went down for days, which was potentially devastating for anyone who depended on it. I think we can attribute that disaster to growing pains—I don’t expect anything like that to happen again—but you never really know.

For me, Skype is a winner. Over the past few weeks, I’ve had it running side-by-side with my landline, which is quickly fading into a distant memory. I’m pleased with it enough to set aside my gripes for the time being and hope that the features I want will eventually be integrated. Other folks might not be so accommodating.

Along with the Philips phone, I got my mitts on the brand new Netgear Wi-Fi Phone, which is essentially a Skype cellphone. It’s nifty little toy, but that’s really all it is—a toy. My problem with it is that I can’t think of a single situation in which I’d use it. The phone doesn’t have cellular service, so it only works in wireless hotspots. I can access T-Mobile hotspots for free, but I can’t access pay-to-play hotspots operated by other providers. It also doesn’t do text messaging. So, I still need to carry my cellphone around with me. Since I always have leftover cellphone minutes at the end of every month I really have no need for these free Skype calls. If they wanted to make this thing useful, they’d pair it with free 3G or EVDO service like the Amazon Kindle. A pipe dream, I know.

That said, the Netgear is a pretty thrilling glimpse into the future. Right now, Europe and Australia have something called the 3 Skypephone, which is a fully functional cellphone with an integrated Skype client. Free Skype calls can be made over the cellular voice network as well as over WiFi, which means never having to carry two different devices. It can text, browse the Web and make regular phone calls, too. Skype says the 3 Skypephone could reach the States within six months to a year. I look forward to putting it through its paces.

What do you think—would you switch to Skype? Or, have you already tried and formed an opinion of it? Do tell!