Rise of the Game-Playing Machines

We humans are no longer undefeated in the classic game of Go. Next year: the first computer poet laureate 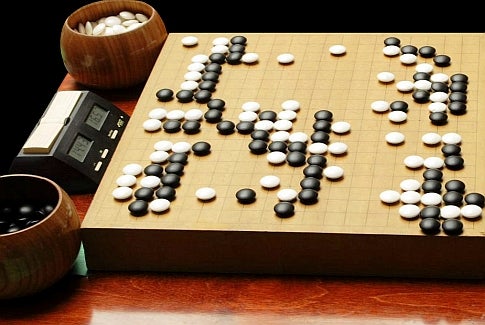 The game of Go has long been a bastion of human brilliance. While computers have gotten steadily better at playing chess and poker, they’ve had a harder time wrapping their silicon minds around the elegant Japanese strategy game. That’s why it’s a big deal that a computer Go player known as MoGo beat a top-ranked human, Myungwan Kim, yesterday.

While the complexity of chess is quite high — there are an estimated 10123 possible ways a chess game can play out — the systematic nature of that game is susceptible to the sorts of strategies computers are good at, with libraries of endgames and simple heuristics for eliminating possible but nonsensical plays. Go, played by placing stones on a uniform 19×19 grid, does not allow for that kind of shortcut. The strategy that’s proved most effective for computer Go is the Monte Carlo method, in which possible moves are assembled in a tree structure, and given statistical weight based on how likely they are to lead to a win.

As computers get more powerful, those Monte Carlo calculations can be carried out quickly and thoroughly enough to make them an effective tool against humans. For yesterday’s game, the MoGo software ran on a supercomputer with 800 parallel processors.

It’s starting to seem as though it won’t be long before computers can reliably beat human champions at Go, chess, and all the other pursuits in which we used to be the dominant species. I have yet to see a computer that can bid a bridge hand with any skill — that’s yet another genre of strategic problem — but I’m not putting too much money on the human team.