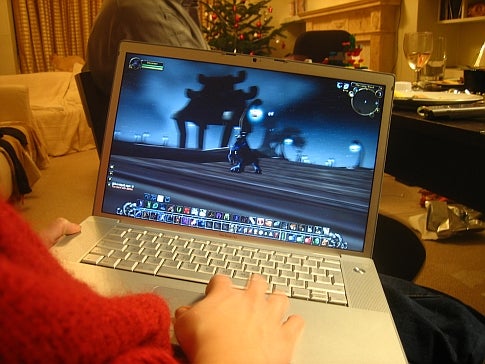 In a famous scene in the first Matrix movie, a character takes a bite out of a juicy steak. He knows it’s not real, but enjoys it anyway. In some ways, a video game — just moving pixels on the screen — is a similar virtual reality experience. No, the aliens in Halo 3 are not real, but we pretend they are. That is how a game can pull you from a living-room couch into a foreign realm.

For some, though, video games are too compelling — too addictive. The warning signs are obvious: compulsive playing, scorning friends and family in the real world, an inability to think about other subjects. Ten million people have signed up to play the PC role-playing game World of Warcraft. In Halo 3, the wildly popular first-person shooter for Xbox 360, almost 7 billion people have been killed online since its debut, and 11 million die each day, according to ITwire.com.

Sobering statistics? Or maybe just a lot of people having a really good time?

Whichever view you hold, the fact remains that video game addiction is a real problem. According to Kimberly Young, who wrote the book Caught in the Net, online games like World of Warcraft can be more addictive than single-player video games; collaborative elements and chat features make it especially hard to put the controller down. A first step is to just admit the problem. One site, WoWdetox, acts as a community support group for players who want to quit the habit. Users post their pleas, rants, and stories.

Many posters on WoWdetox decry the value of the game compared to real life: “Over half a year wasted,” says one. “Please God, somebody help me, I don’t know what to do,” says another. A few explain that they have decided to cut down, not quit cold turkey; some aim to play only 30 minutes per day. I asked Blizzard, the makers of World of Warcraft, to comment on the problem, but they did not return emails inquiring about WoW addiction prior to the publication of this piece.

“WoW addiction is a problem as it can interfere with people’s real-life relationships and responsibilities,” says Jessi Johnson, who runs WoWdetox. “Not only that, but real life seems to take a back burner to WOW for just about everything except the bare necessities for some people.”

If you think you might be addicted to video games, you can find information and (offline) counseling centers via the Center for Internet Addiction Recovery.