CopterDarts provide much of the fun of lawn darts, without the risk of impalement 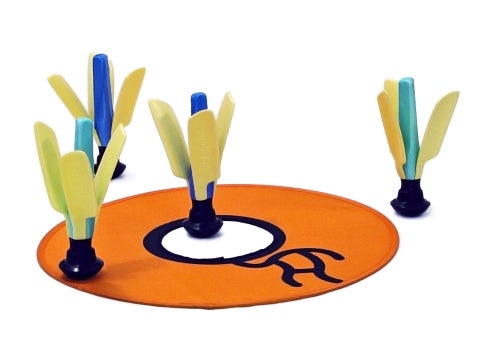 From horseshoes to cornhole to bocce ball, every red-blooded American enjoys some form of lawn game during a summer barbecue. Each generation, innovators and entrepreneurs attempt to capitalize on a family’s desire to relax outside, with a cold beverage in one hand, while competing in a game that doesn’t require breaking a sweat. There is perhaps no more notorious failure in fulfilling these requirements than lawn darts. While the foot-long spears satisfied our need to compete, they ignored the fact that flying sharp objects, running kids, and that aforementioned beverage don’t mix well. In 1988, the CPSC banned the game in the United States, but with the recent launch of OgoSport’s Copter Darts, what’s old is new again (and much safer).

The rules of Copter Darts are the same as those of lawn darts: Throw the dart towards the target and make up whatever scoring system ensures that your team wins. Where the new version differs is in the design of the so-called dart. OgoSport’s version has replaced the 12-inch metallic dart (did we mention they were sharp?) with a rubber ball that might leave a bump but likely won’t puncture a lung. An additional component of safety, and complexity, is added by three foam helicopter wings affixed to the central foam shaft. When throwing underhand, with an upward motion, the wings remain flush against the shaft upon launch but naturally deploy during free fall, creating a helicopter-like spinning motion that lets the dart slowly descend to the ground.

During our test run (Fort Mason Park, San Francisco, 76°) the copter effect was both impressive and difficult. The game provides no recommendations on the appropriate distance for the target. Early rounds of 40+ yards were reachable with the darts but with no accuracy or signs of improvement. Maintaining a lower trajectory (along with sidearm or overhand throws) provided the appropriate distance but negated the copter effect, essentially turning the toy into a bocce ball with foam fingers attached. Tossing the copter correctly provided an aerodynamic descent but never once got a dart close to the target. Despite two master’s degrees in engineering on the field of play, we couldn’t quite conquer the aerodynamics (we’ll blame it on the wind). Frustrated but determined, we shortened our course to approximately 20 yards with much greater success (but less need for a helicopter-style landing). Content that we had successfully added another game to the bag, we sat back in our lawn chairs before breaking a sweat.

During play we had remarked that the soft foam construction, while safe, didn’t look incredibly durable (especially for play with children). Our worst fears came true thanks to a rabid dog who perhaps couldn’t stand watching us miss the target anymore (see picture). So, should you choose to pick up the new toy, we’d suggest doubling the order (it comes with four darts for $30) in case Fido gets hungry. 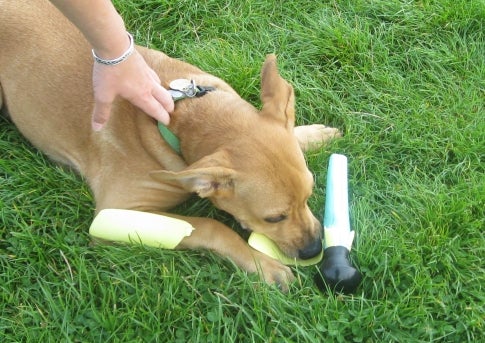