Folding Proteins On Your Lunch Break 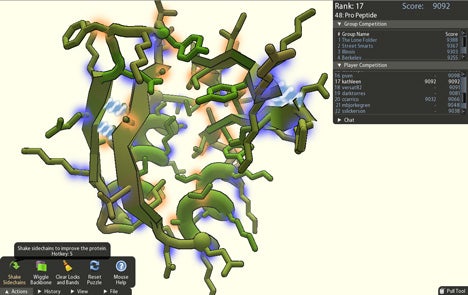 Tired of car chases, robberies, and general action-packed anarchy? Set aside Grand Theft Auto IV for a minute and enter a new kind of gaming adventure: the exciting world of protein folding! Researchers at Howard Hughes Medical Institute and the University of Washington have developed Foldit, a free, online game in which players compete to design proteins.

Now if that sounds fall-asleep-on-your-keyboard boring, consider that you may end up doing some good. Scientists will actually test some of the proteins that players develop to see if they could be used in new drugs. In the game, which you can access here, you start out with a few practice levels in which you learn the basics of protein folding, then graduate to real proteins.

“We’re hopefully going to change the way science is done, and who it’s done by,” says Zoran Popovic of the University of Washington. “Our ultimate goal is to have ordinary people play the game and eventually be candidates for winning the Nobel Prize.”

Try doing that with Scrabulous.