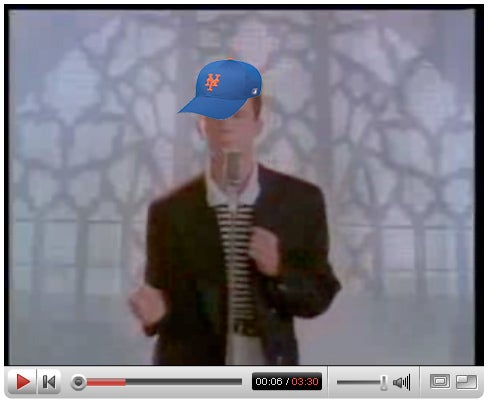 Ah springtime: trees blooming, bats cracking, nerds ROTFLTAO. Last week, the Mets announced that their (filched) year-old tradition of an eighth inning, stadium-wide sing along of “Sweet Caroline” would be updated. They gave fans 10 pretty lame choices and, in true 21st century fashion, let them utilize the power of the Interweb to voice their preference. Of course, the following happened:

Fans went to the Mets site and dutifully cast their votes. Meanwhile, Digg users stumbled onto the site, realized there was a write-in box (choice 11) and flipped out at the opportunity to, as one commenter put it, “rickroll an entire city.” For a little background, a “rickroll,” in online meme-speak, is linking an unsuspecting soul to a YouTube video of Rick Astley’s 1987 smooth jam “Never Gonna Give You Up.” It’s so popular that YouTube itself redirected all of their homepage video links to the Astley video for April fools this year.

The plan made the usual rounds, landing on Fark and getting picked up on sites like Valleywag; along the way pulling in the thousands needed to swing the system.

Today is the Mets opener and during that eighth inning they’re playing the top song–yes, “Never Gonna Give You Up” was the winner by a long shot. And despite some reports to the contrary, a quick call to their press office revealed that the Mets are very happy with how the vote turned out (or that’s at least their current party line).

So, if you’re heading to Shea brush up on your baritone and that weird little dance. Congrats Internet, you’ve won again. Can we please move on to something new now?