In Making NCAA Picks, a Statistical Model Proves Most Accurate

Georgia Tech statisticians use Markov chains for a combined 83 percent accuracy over the past nine tournaments. Who is the computer favorite this year? 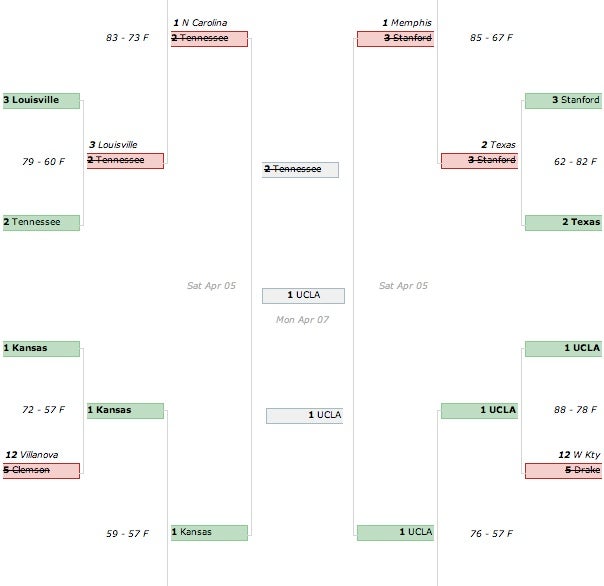 In poker, it is well known that playing the odds will net you more wins than losses, but it won’t make you a top player. For that, you need an unquantifiable ability to read the other players at the table and decipher their emotional state when they make bets. Just the opposite is proving to be true when it comes to betting on winners in the NCAA tournament. Engineering professors at the Georgia Institute of Technology have demonstrated that statistics accurately inform success in the tournament. Most people’s picks are based largely on emotional inference, they say, which leads to inaccurate choices.

Their work has come about through a computer ranking system they devised called the Logistic Regression Markov Chain or LRMC (if you’re looking to geek out on Markov chains, see our previous article on airline boarding, which also uses the Markov chain to make its predictions). By analyzing factors such as scoreboard data, home court advantage, and margin of victory, the system’s algorithm has achieved an 83 percent rate of accuracy over the past nine NCAA tournaments.

Another key to its predictive abilities is that it gives a low statistical weight to close games. The researchers determined that in a very close game, the better team wins just over half the time, rending the contest effectively as a coin-flip.

With all four number one seeds making it to the Final Four for the first time ever this year, LRMC analysis is proving particularly prescient. Stay tuned to the tournament’s final two rounds this weekend to see if LRMC is right in its endgame: it’s chosen Kansas to win it all.