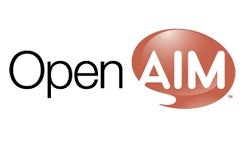 AOL last week finally opened its hugely popular AIM chat network to multi-client third-party access. The SDK had been partially open to developers, but with restrictions against using it with multi-network IM clients. In the past, developers behind popular chat applications like Trillian and Adium have had to reverse engineer or otherwise hack their way around using the AIM network.

OpenAim includes a variety of previously unavailable features and tools, like increased access to OSCAR, AIM’s key protocol, and APIs for mobile application development. In exchange for the access, AOL will require developers to commit to two of five possible features in their clients, such as a display ad, or launching the AIM Dashboard as the app’s launch start page.

There is a hitch, however, for the open source chat projects, like Adium. The OpenAIM license is incompatible with the license that allows developers to share and distribute Adium freely. OpenAIM requires its use to be non-transferable. Although the libraries and features would be off-limits, the release is still beneficial for open source developers because of its increased access to documentation on the OSCAR protocol.