Today's everyone's favorite calendar phenomenon—but why exactly do we leap? 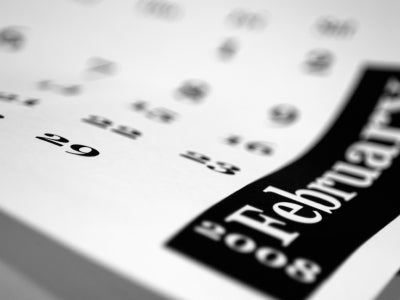 Happy Leap Year Day! Today is February 29th, the hanger-on day we get at the end of February every four years. Everybody knows it eventually comes around and most of us learned the thirty days hath September rhyme in school. But we could probably use a refresher on why exactly it shows up. Let’s take a look.

Our day is exactly twenty-four hours long. Our year, on the other hand, is just shy of 365.25 days. In a regular calendar year, we simply ignore that quarter day and go about our business. If we were to do that forever, eventually our calendar would be so far behind that the seasons would appear in the wrong months. So to catch up to the difference, every four years we add the previous three years’ quarters to the current year’s quarter to make a whole day that we tack on to the shortest month—February 29th.

Now, remember I said our year was just shy of 365.25 days? It’s actually 365.24, but we use 365 and a quarter because that’s close enough to work over the course of four years. Over the course of a hundred years, though, that difference adds up. If we simplify the math, we find that after 100 years, because of that .01 days we’ve been ignoring, we come out nearly a day ahead. So every 100 years we skip the leap day to catch back up again.

And if that weren’t enough for you (and you’re still reading), there are even more digits following that .24 that keep it from working out to an even number that cause our calendar to wobble slightly off its track. Suffice to say, every 400 years, we add the day back in to readjust. After that, we throw up our hands and leave it to the astronomers to figure out.