Emailing Your Future Self 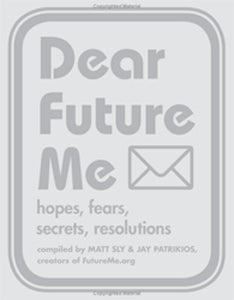 Everyone at some point wishes she could talk with her “future self” and have some insight into how it’s all going to turn out. Unfortunately—unless you count Miss Cleo’s tele-clairvoyent services—technology hasn’t given us a portal to the future yet. But it has improved upon the time capsule.

FutureMe.org, a Web site that lets you post emails to yourself which will be sent to your inbox up to 50 years from now. The project was widely blogged, NPR’ed, and showcased at Austria’s Ars Electronica, the largest digital art museum in the world, as more than 400,000 people visited the site to send messages to themselves that were often funny and always poignant.

This spring, Sly and Patrikios published 280 of their favorite letters (users have the option of marking their posts “public but anonymous”) in a book called Dear Future Me. The book includes fascinating notes from an Alzheimer’s patient who wanted to preserve his memories, an email from a soldier on his way to Iraq, and many more of the deepest thoughts of strangers.

Thanks to Eric from Sneakmove for putting this on our radar today.