PopSci Recommends: What I Learned About Einstein In 4.5 Hours Of Opera

Did I mention there was no intermission? 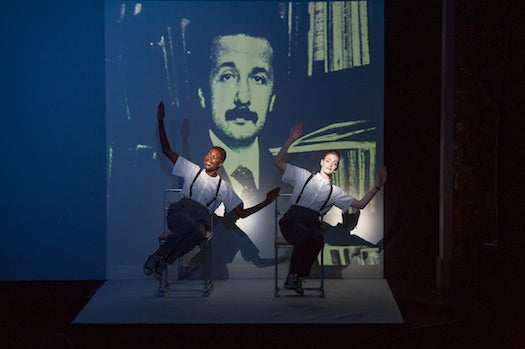 I went into the production of Philip Glass’s “Einstein on the Beach” at the Brooklyn Academy of Music on Friday, curious to see if this famous 1976 work would tell me anything about science.

In the program, I found no Einstein (although one orchestra member wore a white wig and mustache) and no beach. Also missing: Coherent lyrics. Oh, and a plot.

If Einstein was there at all, it was in the music. Philip Glass’s composition (often described as minimalist) is highly repetitive. It takes a few measures and repeats them dozens of times with little variation. Listen to the example below. It sometimes felt like a mantra, other times like a plodding freight train (a good thing!).

Somewhere between three and four hours in, I reached sensory overload, felt trapped and scared, and started wondering if I was about to go insane.

The feeling was appropriate for an opera named after Einstein. Much about Einstein’s work is difficult to truly comprehend. Our brains evolved in a hunting and gathering environment. Our experience is classically Newtonian. I’ve never traveled close enough to the speed of light that special relativity became noticeable and time appeared to stretch or shrink. Most of us have never seen matter turn into pure energy. Although we have equations and words to describe such phenomena, the ideas are not intuitive. They are overwhelming and beautiful and sometimes frightening. And Glass has captured some approximation of that.

Susannah Locke is an associate editor at Popular Science magazine.