Tested: The Sports Drink from Space

Can a non-astronaut benefit from--or stomach--NASA's sports drink? I downed a few bottles to find out 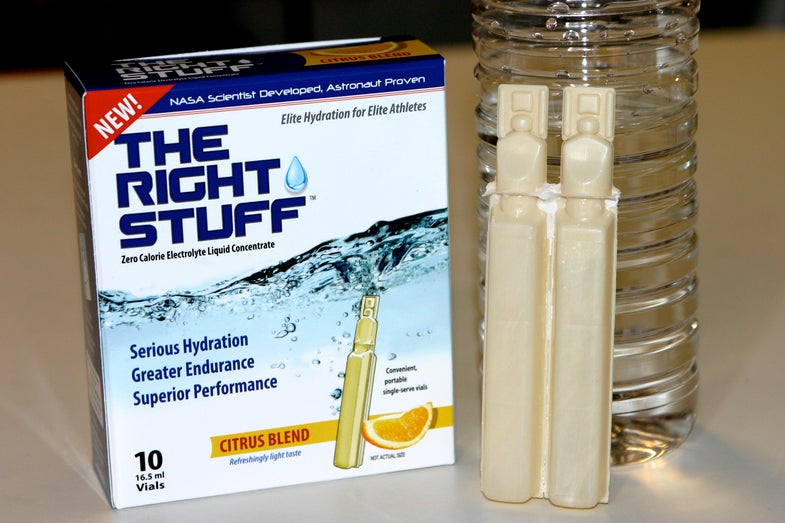 Did you know that several of the NASA research centers scattered around the country keep lists on their Web sites of the technologies they have available to license and sell to the public? Neither did I, but that’s why I’m not launching businesses like David Belaga is. He’s the CEO of Wellness Brands, which plucked a beverage NASA developed to keep astronauts hydrated and just started selling it as The Right Stuff, a concentrate for elite athletes that want to separate their electrolyte intake from their carb intake (carbs in sports drinks typically being some form of sugar).

I consider myself more of an elite non-athlete, but on a few recent runs, I poured some Right Stuff vials into bottles of water to see if it helped keep my whistle wet.

The Right Stuff is a mix of three electrolytes: citrate, chloride and sodium. Together those last two make salt. It’s counterintuitive, but salt is important when you run — they even hand out salt packets at marathon aid stations — mostly because you tend to lose more through sweat than you replace with plain water, and too little sodium can wreak havoc. At worst, it leads to hyponatremia, a condition that’s gotten headlines in the last couple of years for killing beginner marathoners who drank too many fluids during the race, diluting their sodium levels.

So why not just sip salt water? Because that can give you diarrhea, which sucks on mile 14, but sucks a lot more on a spacewalk. So NASA honed this formula for maximum electrolyte delivery — hydration — with minimal nausea. Belaga’s team created the flavored versions, berry and citrus (it’s also available unflavored), with the challenge of not adding any sugar (carbs). After swigging bottles of all three versions, I believe that they’ve succeeded there, because it is decidedly unsweet. All three tasted the same to me: salty enough to elicit a bitter-beer face, but not harsh like straight saltwater, and with little aftertaste — it reminded me of something you’d swish at the dentist’s office. At the risk of sounding like a pretentious foodie, it has an odd mouthfeel — it almost feels extra wet, and left me spitting more than usual. One colleague in the office asked for more after trying it.

So is it worth it? I will say that, on a hot six-miler, I felt less thirsty but drank more than I usually do (which is good but a little unexpected, since one of the side-effects of salt intake is that it’s supposed to make you feel more thirsty so you’ll drink more). It certainly did its job — replacing my electrolytes without any extra sugar.

Belaga’s team taste-tested the formula with a number of elite athletes, and this is the version they gave the go-ahead. I suspect either it’s an acquired taste, or those guys are so accustomed to suffering they didn’t notice the unusual flavor.