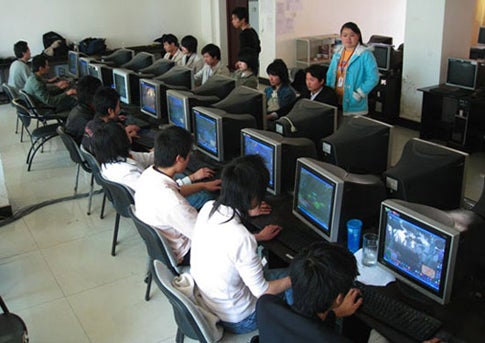 The secret to happiness in life is finding something you would do anyway, and getting someone to pay you for it. via Venture Beat
SHARE

Bad news for professional orcs all across the Middle Kingdom. On Monday, the Chinese government announced a ban on the conversion of virtual money into real money for the purpose of buying actual goods and services. By allowing Chinese citizens to spend real money on virtual products, but not vice versa, the government has specifically targeted gold farming, an activity that employs hundreds of thousands of Chinese workers.

Gold farming, for those who don’t know (those who have real friends and no vitamin D deficiency), is a job wherein you accumulate advanced character traits, elusive equipment, and in-game currency in online games, and then sell the traits and booty for actual money to players who’d rather spend real currency than the time needed to accumulate the items or character levels themselves. In China, many young people pursue gold farming as a profession, often in tightly controlled companies that have workers playing around the clock.

According to Juan Carlos Pineiro Escoriaza, director of a documentary about online gaming called Second Skin, China’s attempt to curtail gold farming stems from a desire to tightly control the country’s economy, and its exchange rate in particular.

The Chinese government pegs the value of the yuan to the price of the dollar, and carefully manipulates the exchange rate to ensure the large trade imbalance that has fueled China’s astounding economic rise. Gold farming offers a way around those state-controlled exchange rates, and thus undermines the Chinese government’s management of the national economy.

When Escoriaza made the movie, the exchange rate was US$50 (341.80 yuan in 2007) to 1000 World of Warcraft gold pieces. However, the proliferation of gold farms has significantly devalued online gold, which may have in turn led to fears that gold trading could spread that devaluation to real currency.

Escoriaza also added that a number of the gold farms he visited while making the movie were controlled by the mafia, so this measure might have a law-and-order dimension as well.

Whether this new law actually ends a practice that already exists in a realm outside both real-world and online laws remains to be seen. But the fact that government pays any attention at all to online gaming represents a watershed in the relationship between real and virtual economies.

“The fact that we have a currency in an online space that affects real currency enough to cause government action, that’s intense,” Escoriaza told Popsci.com. “As more and more people use online spaces for virtual trade, this will become more and more common.”

[via Ministry of Commerce, People’s Republic of China]