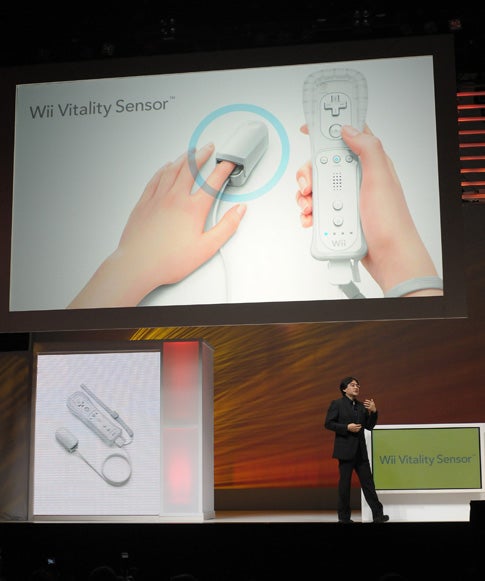 Apparently Nintendo executives frequent PopSci.com. Last year we evaluated the Wii Fit and begged for more technical ways to quantify how hard someone is working on the Wii. Yesterday, at the E3 conference, Nintendo did just that, unveiling the Wii Vitality Sensor–a finger-clip heart rate monitor add-on.

The sensor clips on the index finger and is plugged into the standard controller port on the bottom of the Wiimote. Nintendo did not announce any specific games that will utilize the Vitality Sensor but suggested the first will be unveiled next year.

The sensor won’t just be used to monitor elevated heart rates during physical activity; according to Nintendo President Satoru Iwata, it will also be used in games that help players unwind and relax

Our first criticism is the size of the sensor and that it’s linked by wire to the controller. With chest strap, ear clip and wrist watch monitors long established in the fitness industry, why does this thing look like the contraption at Walgreens back in 1995 used to check your heart rate for 25 cents? Or, scarier still, something that seems more at home in a hospital or old folks’ home than the game room?