Robots to shuffle your cards, play you in a game of billiards and sink puts from the green 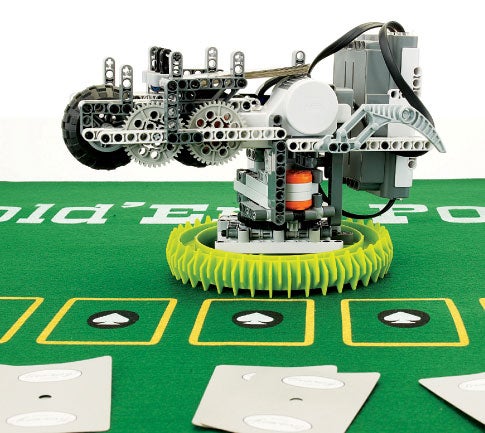 Vegas card dealers make it look easy, but sliding a uniform number of cards to a set number of players turns out to be a tough robotics challenge. As a robotics teacher in Australia, Damien Kee had seen a lot of automated card dealers that were too slow or were unable to reliably control whether cards landed face-up or -down. Using parts from LEGO programmable robotics kits, Kee wrote software that instructs connected components to deal two cards to four locations.

The dealer rotates quickly between player positions using a LEGO turntable placed inside a stabilizing base. Kee tackled the trickier card-flip problem by mounting two spinning wheels beneath a deck of heavy, wide casino cards. The slower back wheel slides a card from the bottom of the deck up to the front wheel, which then shoots it forward fast enough to prevent accidental flipping. He plans to upgrade future versions with a motorized platform in front of the exit slot to deal cards both face-up and -down and an ultrasonic sensor to detect the number of players present.

Putter ‘Bot
Looking for a fun side project, Bay Area videogame artist I-Wei Huang built a radio-controlled robot that putts a golf ball, using a laser pointer mounted on its head to aim. Two standard-size radio-controlled motors known as servos, powered by an onboard battery, drive a chassis borrowed from a remote-control tank kit. A micro-servo controls the robot’s head, and another swings the arm. The only thing missing is a voice synthesizer so it can curse ferociously after blowing an easy putt. 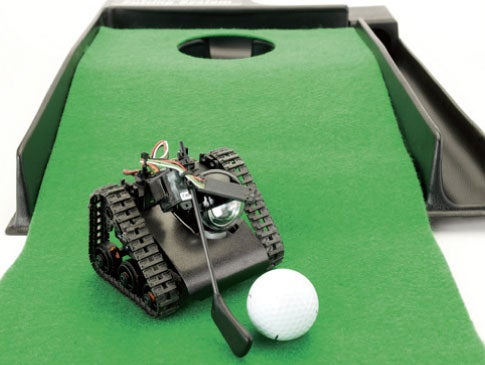 Recent U.S. Naval Academy graduates Michael London, Patrick Livesay and George Yacus II’s robotic pool table uses a webcam that sends an image of the table to a vision program they wrote. After a person inputs the locations of the pockets and of the robot, the system picks out the cue ball, does the required trigonometry, and sends the angles of approach to a microcontroller. Powered by a DC motor and drive chain, the cue rolls into position, and a pneumatic actuator shoots the cue ball. 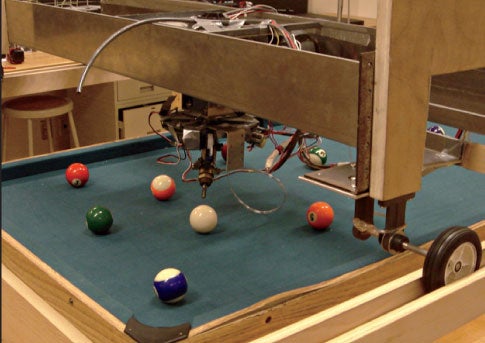