Does the new Star Trek movie represent a turning point in our culture? 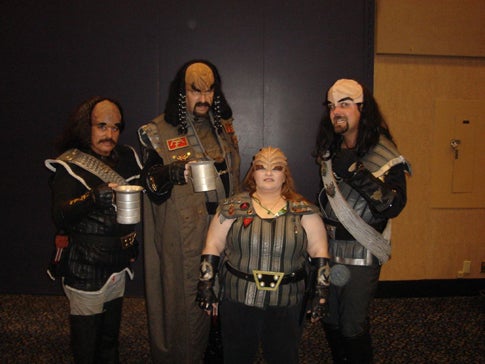 Fourteen years ago I instructed all of my friends and relatives to file past the picture of me with Spock and into the the basement of the synagogue so we could begin my Star Trek-themed bar mitzvah reception. Needless to say, it would be a long while before I had a date.

As I am certainly not the first to mention, the intervening years have seen many of the trappings of nerdery become widely popular. Comic book movies make millions, anime is used to hawk car insurance, and hipsters dress like 1950s engineers (albeit with tighter pants). All that was left for real nerds was free jazz and Star Trek. Now, thanks to J.J. Abrams, we’ve got nothing to argue over except whether or not Music Is the Healing Force of the Universe is genius or just a bunch of noise.

And C.P. Snow couldn’t be happier. As Seed mentioned, last week wasn’t just the opening of the new Star Trek movie, but also the 50th anniversary of Snow’s legendary lecture on “The Two Cultures.” In that lecture, Snow claimed that intellectual culture had become split between the humanities and the sciences. He also noted that the culture of the humanities, which included music and art, became the dominant popular culture. That meant that scientists would be considered ignorant if they weren’t familiar with Shakespeare, Homer, or Michelangelo, but a literature professor wouldn’t be considered challenged if he couldn’t explain the Second Law of Thermodynamics or describe how a battery works.

Flash forward a half-century and you have Star Trek, a movie where the chief science officer (Spock) saves the day, gets the girl, even gets to beat up Kirk. Sure, the movie happens to be excellent (will someone please get Karl Urban a leading role that doesn’t involve fighting Vikings!?), but the $76.5 million gross doesn’t just mean the movie is good, it means that the movie, and its reverence of science, resonates through our supposedly humanities-dominated culture. As further proof of the ascendancy of an evidence-respecting, science-based culture, editorials in the New York Times, Salon, and Time all identify Spock as a precursor to President Obama. In addition to being our first black president, I guess he’s also our first Vulcan president. Or something.

Does this represent the arrival of “The Third Culture,” Snow’s synthesis between the scientific-focused thesis and its humanities-focused antithesis? Or rather, is this the signal of the final triumph of the humanities culture? I can’t help feel that once scientific culture is fully decoupled from the actual work of science, and appropriated for something other than boring, repetitive lab work that over the course of decades leads to profound insight about the natural world, recruiting people into the fields of science, math, and engineering will be even harder.

So, readers, what do you think? Does the success of Star Trek represent a new age of interest in science, or the final step in a process of diluting what little mainstream presence real science actually had?