Taking Your iPhone to the Slopes

How much air is big air? Just check your iPhone 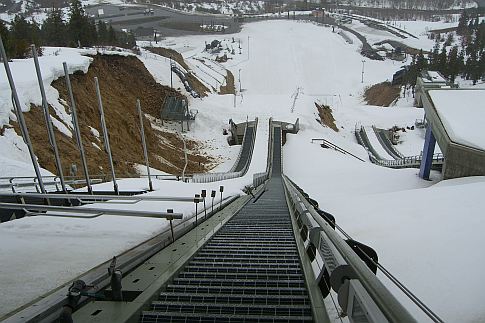 How much air is big air? Just check your iPhone. The latest application for the iPhone is Hangtimer, which allows skiers to quantify just how big they went. Download the application for an absurdly cheap $10, and the iPhone’s — or iPod Touch’s — internal tri-axial accelerometer detects when your feet leave and touch the ground. After each jump, the iPhone displays your flight time, while a plot provides a running tally of your jumps and speed throughout the day.

So if you’re only skiing the greens, don’t let your friends borrow your phone. There’s a still a few good weeks of snow, so no excuses.

The Hangtimer application is offered by Dropzone Corporation, a company familiar with accelerometer technology. Last year the company launched its own standalone device, at a pricey $74.99, that housed an accelerometer in a sports-watch-looking gadget that connects to the hip using a carabiner. With the iPhone explosion, engineers realized their algorithms could work just as well on the iPhone’s internals; they actually concede the iPhone accelerometer might be better.

Ironically, the iPhone application offers much more than the standalone device. The GPS functionality automatically recognizes what ski resort you’re at, worldwide, and downloads current snow and weather conditions, trail maps, and even what lifts are currently open. Even if your 3G network loses signal on the top of the mountain, the latest data is stored locally for reference. The GPS also keeps track of where you biggest jumps occurred, launching Google Maps to provide the exact latitude and longitude (it doesn’t yet recognize the jump according to the trail map, but that’s coming). Your top ten biggest jumps are stored, logging the resort, date, time, and of course your total air. The application will continue running until shutoff and doesn’t drain the battery significantly. The only disadvantage of the phone versus the standalone model is the durability. The iPhone doesn’t do well when buried in three feet of snow, and likely won’t withstand a 25 mph impact against that tree that wouldn’t get out of your way.

The algorithm powering Hangtimer seems simple enough: detect an acceleration impulse on liftoff and touchdown. But according to Dropzone engineers, the ability to detect a smooth landing and touchdown isn’t so simple. Think about a snowboarder on a half-pipe. The system can detect, down to 10-millisecond accuracy, the difference between moving up the half-pipe and actually lifting off of it. The software can work for just about any sport from base jumping to mountain biking to motocross. Hangtimer plans to offer specific applications for various sports with customized features (e.g., mountain biking maps). There are also plans to add a wipeout indicator using the accelerometer to quantify just how hard you hit. That’s assuming your iPhone survives.