Now playing on your console or PC: blockbuster game tie-ins 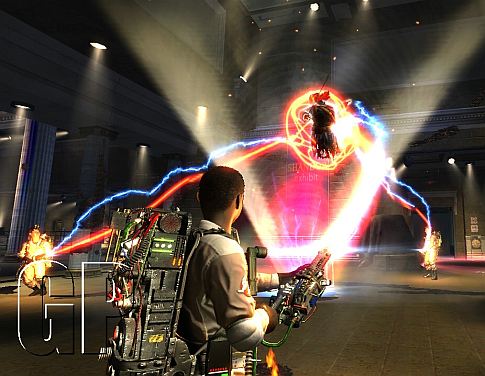 Chief amongst them is Ghostbusters. Picking up where the films ended, and featuring an original script penned by series alumni Dan Aykroyd and Harold Ramis, who also make cameos, it’s the franchise’s first true sequel in two decades. You can’t beat the premise either: As a new team member, players join familiar faces such as Bill Murray and Ernie Hudson (OK, poor choice) to battle Slimer, Gozer and the Stay-Puft Marshmallow Man. Initial impressions are positive between the game’s comprehensive voice-acting cast and action-oriented, proton-pack-heavy play. But while we wait for the title to ship in June, here’s hoping an inadvertent mid-production change of publisher from Vivendi Universal to Atari hasn’t resulted in any crossed streams.

In the meantime, piggybacking on the silver-screen blockbuster’s unexpected success, Fast & Furious for the iPhone offers surprisingly good miles per gallon. Never mind featured 3D rubber-burning activities though, which run the gamut from checkpoint races to competitions wherein cars serve as wagers. The title’s most compelling feature by far is actually integrated YouTube support, letting wheelmen upload and share videos of their top performances.

Building on the success of seminal first-person adventure The Chronicles of Riddick: Escape from Butcher Bay, follow-up Assault on Dark Athena also proves a satisfying diversion. Remixing the original prison break tale in high definition, the package further includes a standalone sequel that’s set immediately after the initial outing’s events. Despite introducing new stealth combat sequences and multiplayer options though, some may be disappointed with the latter’s repetitious setup and tendency to favor more traditional run-and-gun mechanics.

Similarly, The Godfather II is also a game of two halves. Although the title successfully apes its predecessor’s (and Grand Theft Auto‘s) freeform 3D kneecapping approach, it additionally tacks on an overarching strategic mode that sees you battling for turf and building rackets. Needless to say, the engaging tale goes heavy on the spaghetti sauce, but won’t be to every aspiring Don’s taste.

However, for those who favor mindless fun and spectacle over intricate wiseguy antics, Wanted: Weapons of Fate makes a satisfying alternative. Although curving bullets and slowing time loses its charm after a few hours of brain-dead, trigger-mashing mayhem, let’s be honest. There’s definitely something to be said for instant gratification, as battles aboard freefalling planes can attest.

Sadly, to this day, none can claim to match classic celluloid staples like Raiders of the Lost Ark‘s rapacious charm, or Lost in Translation‘s sheer emotional impact. But if pure escapism’s your goal, we’re confident that these cinematic gems are at least worth the price of a ticket.