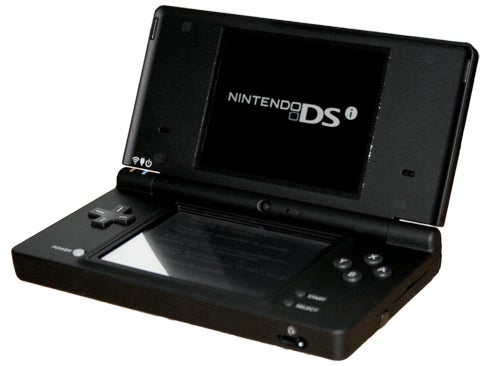 If it’s not broken, don’t fix it: Simply add a couple digital cameras, music playback, voice recording capabilities and an online store. That’s the mantra behind Nintendo’s new DSi handheld, just launched this week. We put the portable game system through its paces, and found it a surprisingly robust contender, albeit not for the reasons you might think.

Roughly 12 percent thinner than its bestselling predecessor, the DS Lite, the device also packs dual 3.25-inch screens, just a smidgen brighter and hair larger than those users are accustomed to. As with new SD card support, letting you store songs/photos on swappable memory, options to listen to, slow, speed or add special effects to digital music in AAC format prove a welcome introduction. (At least for iTunes users, who won’t have to go to the trouble of converting incompatible tracks over…) Ditto for the Super Mario Bros.- and Excitebike-themed screensavers viewable while jams bump from your speakers.

Although it’s capable of playing all existing DS games, the machine sadly eliminates previous models’ Game Boy Advance slot, though, so collectors can no longer enjoy classic GBA cartridges on the console, or utilize accessories such as Guitar Hero: On Tour‘s faux instruments, which make use of the port.

But now, beyond an intuitive touch-screen interface, you do get two 0.3 megapixel (640×480 resolution) cameras — one facing inward, for taking pictures of yourself, and one outward, for snapping photos of friends. While kids will most enjoy the goofy possibilities presented here, adults can’t help but chuckle at the various options offered as well. From stretching subjects’ noses to merging multiple faces into hilarious hybrids or applying googly eyes and bristly mustaches using a built-in editing suite, digital touch-ups have seldom been so fun. Some games, such as downloadable gem WarioWare: Snapped!, even employ the lenses to track player movement, suggesting more ingenious uses to come.

Still, from a stylish matte finish to the ability to record and remix your own brief audio clips, hardware upgrades are mostly of the evolutionary, not revolutionary sort. Where the gizmo really shines is in the introduction of the DSi Shop, an online storefront that lets you wirelessly retrieve new games on-demand.

Available for free or at prices ranging up to $8 (paid out in “Nintendo Points”) via Wi-Fi connection, the current selection proves middling at best. See the relatively slow Opera Web browser and five underwhelming outings like Bird & Beans or Brain Age Express: Math. See past initial hiccups, however, and the future looks bright. While lacking the Apple App Store’s “anywhere, anytime” download capabilities and robust software library, the situation should improve quickly here. Allowing a broad pool of game developers to offer a wide range of software to suit all tastes, and at a variety of price points, we expect big things to come.

Should existing DS owners rush out to purchase one? That’s a negative, at least until the inventory of downloadable diversions expands. Nonetheless, first-time shoppers will find the extra $40 the system costs over existing units an easily justified expense. In other words, game on!