Triathlons: Brutal to the Body

Study shows that triathlons are twice as deadly as marathons 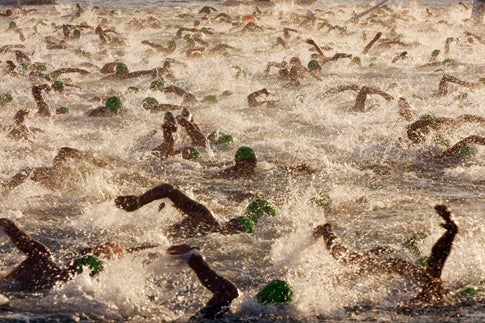 At the first-ever Ironman triathlon in 1978, the 15 competitors read these instructions in the race guidelines: “Swim 2.4 miles! Bike 112 miles! Run 26.2 miles! Brag for the rest of your life!” Well, sure — unless you die trying. A study presented Saturday at a meeting of the American College of Cardiology shows that the grueling triad of events is indeed particularly strenuous, with a risk of sudden death twice that of marathons.

Kevin Harris, a cardiologist at Minneapolis’s Abbott Northwestern Hospital, tallied records of nearly a million athletes in triathlons of all lengths during a 33-month period. Fourteen died — a tiny but “not inconsequential” risk, said Harris.

What’s interesting is that 13 out of the 14 expired from heart failure while swimming. (The last was a bicycle crash.) Harris isn’t certain why the swim leg of the race is the most deadly. While it’s common knowledge that a top-speed swim in a chilly ocean or lake is unduly demanding on the cardiovascular system, Harris has another theory. Ailing competitors, he suspects, have more difficulty slowing down or flagging for help during the crowded, frenzied swim.

Still, the inherent risks of the race — organ shutdown, nonstop vomiting, and extreme dehydration among them — aren’t swaying triathletes from their bragging rights. The number of Americans signing up for triathlons has swelled an estimated 22 percent since 2005.