The dress that leaves the wearer naked (watch the video!) and other sci-couture delights 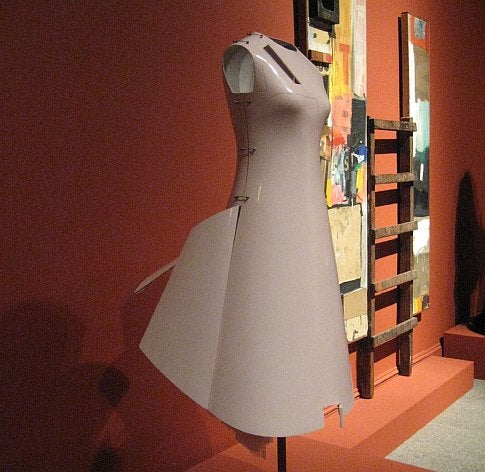 Fashion and technology are not usually mentioned in the same breath. However, two different innovators in the world of fashion have blurred the boundaries between performance, art, environment, and technology with their avant-garde endeavors. We’re not talking couture lab coats (…yet), but we are talking magically disappearing dresses, skirts that double as furniture, and British models that are naked faster than you can say macromolecule.

Designer Hussein Chalayan is one person who has made these realms collide. A forward-thinking individual well beyond the prototypical fashion designer, his use of zany materials normally considered exclusive to non-fashion realms, is unrivaled. He’s made a metamorphosing dress that serves as a lightning-fast chronicle of the evolution of fashion, condensing history in minutes with rising hemlines and varied silhouettes from prudish long Victorian to modern mini. Such shape-shifting feats have to be engineered by serious technicians: for his shows, he has employed no less than the peeps who did animatronics in a Harry Potter movie.

A retrospective exhibit of his work is on display at the London Design Museum (through May 17). The display includes tricked-out showpieces from past collections, demonstrating the wealth of unexpected materials he’s crafted into unfathomable incarnations. Far beyond mere outfits, they are like sophisticated toys and art objects that transform and reconfigure. One piece of apparel is presented as furniture. Meanwhile, a dress for his “Airborne” collection is blanketed with over 15,000 flickering LED lights. A different dress, made from aircraft construction materials, gives the wearer the ability to fly. OK, not really, but it does change shape via remote control. Certainly makes wearing a button-down and jeans feel pretty unimaginative, in any case.

Where many designers reinforce the get-dressed-and-go status quo, Chalayan’s creations destabilize easy-access fashion. By throwing hyper-contemporary technological elements into the mix, he effectively pokes a stick at the fashion world, forcing it to consider things outside of its insular tendencies.

Chalayan is not alone in mixing fashion and technology to push the envelope. London College of Design professor Helen Storey has blended fashion and technology in order to promote green change. Often, “green fashion” means something well-intentioned but ugly and made of hemp. Yet in the hands of Helen Storey, fashion provides a vehicle for environmental awareness without having to sacrifice creativity or aesthetic embellishment. Storey has created, among other endeavors, the Wonderland Project, in order to create awareness about the wastefulness of production. Partnering with Tony Ryan, a science professor at Sheffield, they drew from their respective backgrounds to create the ingenious disappearing dress.

How does one make a dress disappear? The Wonderland project employed a textile designer (Trish Belford at University of Ulster) who made fabrics from polymers — like the ones used in washing detergents. The polymers dissolve when they come in contact with water. Once completed, dresses were hung from scaffolds and gradually lowered into giant containers of water. Accordingly, the polymers in the water caused the materials to dissolve, creating a visual underwater spectacle. The feat was performed publicly to small audiences, and the intrigue factor snowballed. The act toured the UK and Ireland, garnering much interest and praise along the way.

Wish you’d been there? Check out the video of the spectacle by fashion photographer by Nick Knight. In it, the fetching British model/socialite Alice Dellal, draped in the polymer dress, is dipped into a tank of water and goes from clothed to naked in seconds (this is a European production, so there’s absolutely zero nudity censor! Yowza!)

This performance by the Wonderland Project puts forth many questions about product function, durability, and above all necessity: how can we be sustainable in production? How can we reign in excess to prevent waste? What should even be made in the first place? The garment serves as a “caveat emptor” for both producers and buyers, highlighting the environmental wastes and industry excess that occur in production.

For Storey as for Chalayan, engagement with these modern issues is not just a dire necessity but also an opportunity for limitless innovation. Provocative and visually palatable ideas should flourish as vitally as pragmatic solutions.