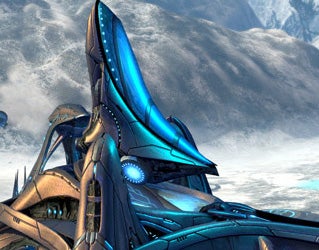 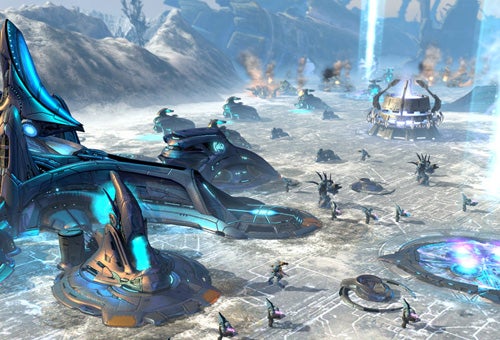 Real-time strategy (RTS) titles have been a cornerstone of electronic gaming since the earliest days of computing. With hundreds of miniaturized troops and vehicles fighting atop lavishly rendered landscapes that change every second, these virtual conflicts provided a brisker, more accessible alternative to tabletop favorites like Stratego, Axis & Allies or Risk. Thanks to the success of franchises like WarCraft and Command & Conquer, the genre has swept across PCs. But Halo Wars is the first console-based skirmish that succeeds in letting you drop the mouse and keyboard to become a true armchair general.

Eliminating the micromanagement and complexity inherent to Windows-compatible rivals, the outing serves as a savvy introduction to the RTS genre. Essentially a fancy game of rock-paper-scissors, it abandons the multitude of unit special abilities and tactical options that make rivals more advanced but far less user-friendly. Better yet, by custom designing Halo Wars for the Xbox 360 instead of simply adapting an existing PC title, developer Ensemble, since disbanded, finds honor while falling on its sword.

One or two button taps suffice to execute virtually any command you’d like to give your army. From selecting single soldiers or groups of units, which can be told to move or attack, to building high-tech complexes and launching hit-and-run assaults on enemy installations, issuing orders couldn’t be simpler. As such, it’s easy to jump right in and marshal familiar troops such as Spartan foot soldiers and Warthog jeeps against chittering extraterrestrials and their hovercraft or energy sword-equipped overlords.

Though a spin-off of Microsoft’s bestselling sci-fi shooter Halo, whose three installments have shifted over 25 million copies combined, Wars varies in many ways. Gone is Master Chief, the franchise’s signature hero. The plot is set 20 years before Combat Evolved, the first Halo title, and it offers fewer compelling twists than its three predecessors. Voice acting and character development also prove underwhelming, as in the case of the tale’s star, stereotypical tough guy Sgt. John Forge.

Instead of clever stratagems, you’ll play more for stunning visuals including swirling snow and bodies that tumble when struck by moving vehicles. Designed to appeal to fans of the original trilogy, high-energy shooters all, the setup doesn’t just evoke the same atmosphere and sweaty-palmed intensity. It also succeeds at bridging the gap between mindless blasters and more methodical titles that hinge on calculated maneuvering.
dme:relatedinfo side=”right” />

Battle-scarred veterans may take odds with its short length and simplistic nature. But as far as we’re concerned here, home console owners are finally getting the kind of explosive outing sure to have them saluting with pride.