Dreams and Nightmares of Future Tech 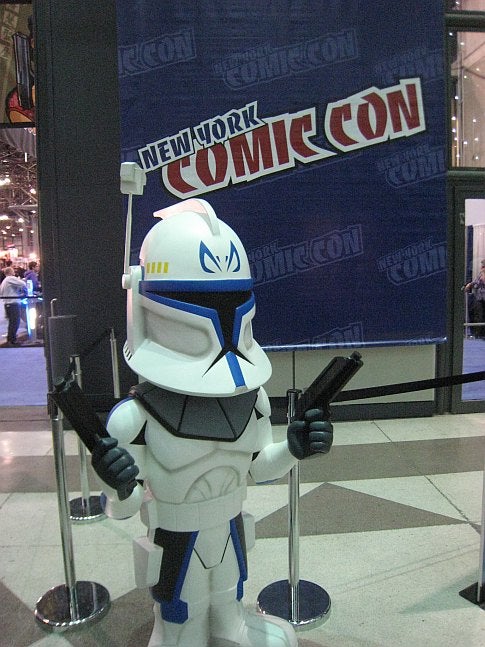 Catching up with artists and writers at New York Comic Con, we heard about new science and technology in comics, graphic novels, video games, and film. While many new stories hinge on emerging technologies, the best of the classic stories incorporate the newest science into ongoing sagas, often rewriting the past. In either case, these graphical genres can explore the consequences of scientific progress in the not too distant future.

Comics are science fiction at their core, but their visual component, devoted following, and constant production allow them to address pertinent fears by glimpsing into the future in a visceral way. For this futurist glance, less scrupulous titles employ flashy, bad science, but prescient science drives the higher-quality work. (We abstain from condemnation of some altogether awful new titles.) Many of the top writers we interviewed felt it was their duty to explore the worst potential future through villains and heroes alike. And even though a certain amount of fantasy — mutants, aliens, and demi-gods — inhabits comics, technology tends to be strongly grounded in popular science.

Although difficult to pinpoint, it is certain that some element insulates comics from the readership and job losses in the rest of the print media industry. Comics — more than other circulated media — are collector’s items. No surprise, hundreds of adoring readers stood in line throughout the weekend to have the covers of their favorite comics autographed, and vendors sold decades old silver-age comics at exorbitant prices.

Here are five of our favorite science-inspired comics, games, and movies from the Con. Feel free to share your own. 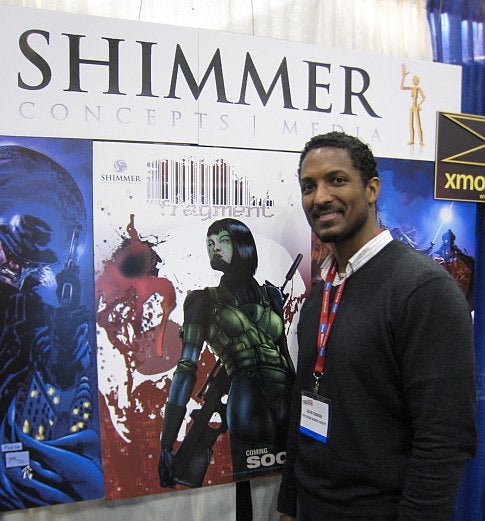 An upcoming comic and animated release, Pale Fragment brings nanotechnology and espionage together in the not too distant future. As a firm believer that science-fiction provides more than entertainment, Wayne Robinson, the illustrator and creator, hopes to explore “how nanotechnology affects us biologically as well as sociologically.”

This detail-heavy multimedia experience is set in the real world, at real locations, with real situations, real limitations, and not too far from today. Above all, technological realism is of paramount importance. Robinson scrapes together his future tech from websites, blogs, and magazines — especially Popular Science.

There are many unknowns in the future of espionage, let alone the present. Robinson speculates: “Will it be people, computers, robotics — what is the next evolutionary step? Given the future of international conflict, who are the next casualties of war? In this story, death from mortar fire gives way to the loss of identity — without victims knowing why.”

Both the illustrated book and animated feature are poised for completion before San Diego Comic Con in August. 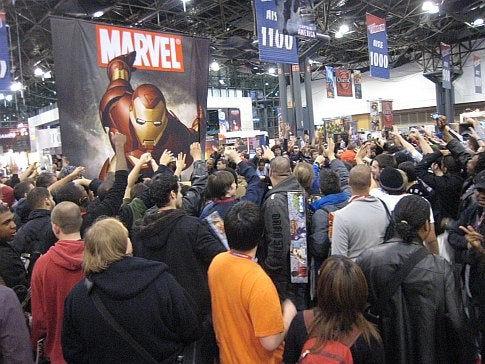 Hundreds of adoring fans swarm in hopes of Marvel swag

Marvel, the comics mogul, continues to reinvent universes and story lines to reflect the political and technological zeitgeist accurately and — of course — to sell more comics. Perhaps it is no coincidence, that, despite failings in other print media industries, Marvel continues to show strong numbers.

Prolific Marvel writers Brian Michael Bendis and Matt Fraction recall the re-writing of the origins of the Marvel stars: Many heroes were originally born out of cold-war nuclear paranoia: radiation and sub-atomic tinkering created Spiderman, The Hulk, Goliath, Iron Man, and The Wasp, among others. But now, in their subtle retellings at the turn of the 21st century, the spider that created Spiderman’s powers shifted to a genetically engineered one; Iron Man becomes more nanotechnology than iron; Goliath’s abilities strayed from sub-atomic manipulation towards advanced robotics and artificial intelligence; and Captain America’s genetic engineering came to the forefront of his soldiering prowess.

In the same way, Dark Reign, issued in December 2008, looks forward to a dark future in the Marvel Universe. In this Big Brother dystopia tempered by fear of “invisible” technologies like nanotechnology, the citizenry trade their freedom and privacy for protection. The change in hegemony occurs through a sly shift from the high-tech state-of-the-art technology of Iron Man to the shadowy explosives and bombardiering of a former villain-turned-savior, Norman Osborn — also known as the Green Goblin. As the author of Dark Reign, Bendis says this reflects real-world situations where simple, nefarious explosives can undermine the prowess of expensive and flashy technology.

The climax of this clash of technologies and ideals has yet to come, but be certain that author Bendis feels obligated to look forward and comment on trends — especially science and technology — that affect the world as we know it in true science-fiction manner. With an extreme aversion to “gobbledygook science,” Bendis’ comic manifestations of science and technology start in the newest headlines from the scientific community, except when the superheroes are aliens, fantastic mutants, or demi-gods, obviously. 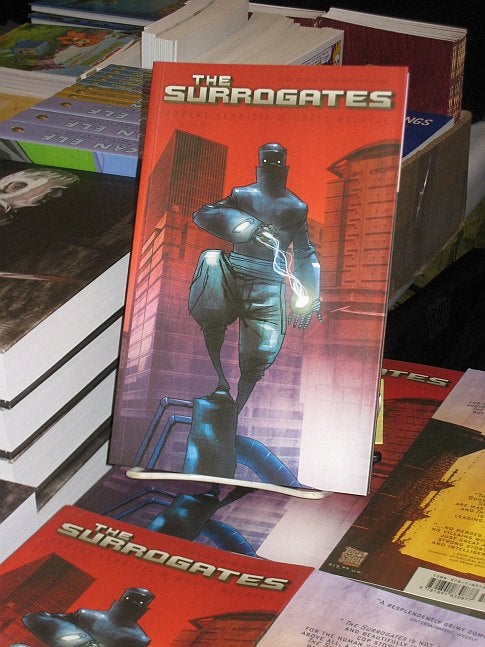 The five-issue series is now available from Top Shelf Comix as a single book.

Robert Venditti is no stranger to the social aspects of virtual lifestyles. Inspired in graduate school by “Cybergypsies,” which chronicles the sociological aspects of people addicted to the internet, and armed with classics like “Do Androids Dream of Electric Sheep” and “1984,” he began writing in May 2002. The resulting graphic novel, The Surrogates, explores a similar world. For those not pathologically addicted to online worlds, “at some point with online gaming, poker, Second Life, or other online life, you have to get up and go out to live your life,” Venditti describes, “but in the world of The Surrogates, you don’t ever have to stop.”

Surrogates are virtually linked android representations of the user, who sits comfortably at home. Complete sensory emersion takes place through a device that rests on the temples of the users. The reasons for owning a surrogate expand upon the current desires for a virtual self — control over body-image, access to distant locations, or a myriad of other reasons — that are conveyed to readers through product advertisements woven between chapters. But not everyone can afford a surrogate and the dystopia abounds with the rich interplay society and the cybernetic technology.

In the world of The Surrogates, people never stop getting input and experience from a disembodied source. For many with cyberspace lifestyles, such a non-corporeal existence is not a great step from their current life. Already in post-production, a Hollywood feature film starring Bruce Willis and Ving Rhames, called simply Surrogates, will be released September 25th of this year. 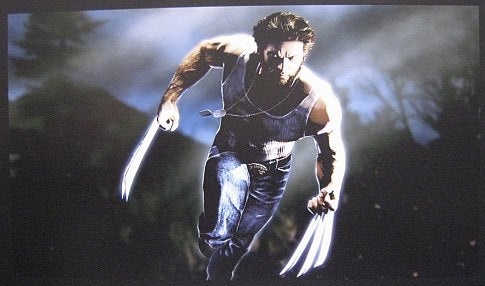 he looks and sounds a lot like Hugh Jackman.

Coordinated with a release of the new feature film, “X-Men Origins: Wolverine,” this gore-laden action game tells a new story of the conflicted superhero Wolverine. Without spoiling the film (or the game), the plot has new twists that incorporates genetic engineering and cloning into the storyline, which dates back to the 1970s. This updates the classic story to reflect the sentiments of our time — where genetic engineering, stem cells, and cloning are highly controversial technologies, with uncertain futures.

Developed by Raven Software in Middletown, Wisconsin, the realistic graphics truthfully convey — for the first time in Wolverine’s history — the results of an immensely strong soldier with sharper-than-razor claws on the rampage. After I watched ten minutes of game clips without blinking, let me say that this game is not for the light-hearted. Nevertheless, the game is scheduled for release in May 2009 on Xbox 360 to coincide with the film, and looks to be a big hit judging from the reactions of convention-goers. 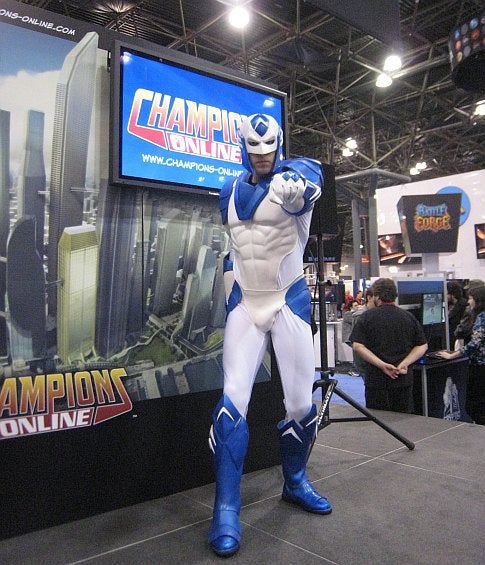 The most famous Champions hero does not seem to have aged since the game’s origin in 1981.

The PC game pays homage to this tradition by providing — unlike other MMORPG games — a blank canvas for players to explain the science (or magic) behind their powers. This is realized as a customizable character profile visible to others in the online world. In this way, the Champions world can constantly stay in touch with the newest in technology and science by putting it in the player’s hands. This hand-off has saved Champions creators from constantly having to re-release their game with the newest guns, armor, genetics, and pharmaceuticals. Although it is not all technology: magical superpowers abound as well.

The executive producer, Bill Roper, formerly at Blizzard Entertainment, has been on the cutting edge of gaming for 15 years. Over a decade ago, he pushed the famous title Warcraft into developing game play for up to eight players — at the time people thought Roper was a madman — paving the way for the multi-million-player World of Warcraft today. Now, he envisions that through the new character freedom, technology will flow from the net to character profiles and around the world via the game. This might seem a lofty goal, but probably isn’t. Online players in other games are known to spend tens of hours to acquire a sleek looking shield or fashionable threads. Given this desire for uniqueness and the constant quest for superior gear in MMORPG worlds, to think that the newest technology featured on PopSci.com might wind up running around in a virtual world is hardly a stretch.

Look for Cryptic Studios to release Champions Online this spring.