This Super Bowl, fans will be able to inform on their neighbors via text message 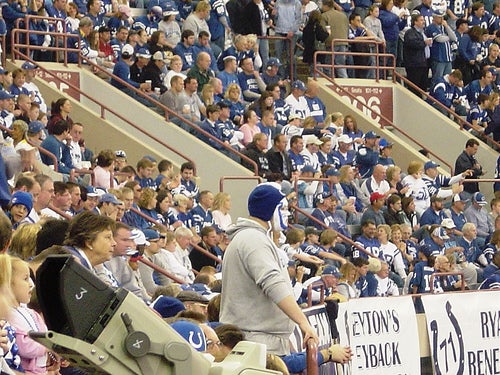 We’ve all been that guy, or sat next to that guy at the game. Maybe he really does think the ref is on his knees, but more likely he’s stumbled well over the line. But hey, you took out a second mortgage on your foreclosed house for these tickets, so you’re not about to cause a scene that’ll get you tossed or walk down 94 stairs in search of a security officer who will tell you to wait till third down is over. Thankfully, those at the Super Bowl this year can merely text for help.

It’s likely you’ve attended a sporting event with Text Technology. In Stadium Solutions (ISS), who is providing the service to Raymond James Stadium for the Super Bowl, first used its platform for advertising purposes two years ago but has since shifted to hooligan tracking.

In either format, the system works similarly asking people to text a key word, provided at that specific event, followed by other relevant information to the phone number 41513 (same number no mater what stadium you’re in). The Miami Dolphins, whose keyword was “fan”, were the only team signed up at the beginning of the year for the service (Vikings, Chargers, 49ers joined mid-season). For rowdy behavior they ask for the issue and location (i.e. FAN, PUKE/BRAWL, section 82, row 13). Doesn’t matter what cell phone you have or where you are, the keyword you include will automatically route the message to the appropriate Web based server where security personnel can monitor the situation.

Fans are notified of the system by banners, Jumbotron messages and even public service announcements by famous players (Dan Marino for the Dolphins). According to ISS, it’s working, with an average of 100-150 messages each game. Security will often zoom in on the section with a camera to verify the complaint before dispatching the appropriate assistance. The Bart Simpson in us all would be disappointed to hear that just 5 percent of the texts are pranks (Ben Dover smells in Aisle 9?) and that personnel can warn fans and ultimately block texts from certain numbers. Despite minimal abuse of the system, ISS has requested we don’t provide the key word for this Super Bowl to ensure some guy in Wyoming can’t send a text trying to get his ex-wife kicked out of the game (remember you don’t need to be in the stadium to ping the system).

Teams can use the technology in parallel for more harmonious purposes like offering prizes for trivia questions, guessing the attendance or getting discounts on merchandise. The teams then store those cell numbers for marketing purposes or to remind that tickets are still available for an upcoming game.

Follow popsci.com/puntsci for our countdown to Super Bowl XLIII coverage.