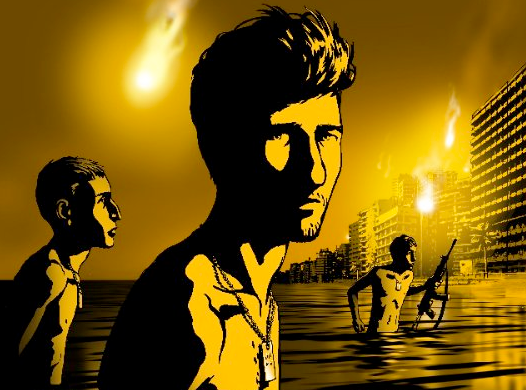 Adobe Flash has helped create many of the animations and games commonly found on websites. But Israeli director Ari Folman used the multimedia software to make Waltz With Bashir, an animated film which explores traumatic memories of his experience as a teenage soldier in the 1982 Lebanon War.

Folman’s work earned the Golden Globe award for best foreign film over the weekend, and has also scooped up best picture from the National Society of Film Critics. Film reviewers have praised the animated effort for its surreal, searing depiction of the director’s repressed wartime recollections.

It also cost just $2 million to make—a far cry from the $100 million budgets for CGI behemoths such as Pixar’s WALL-E.

Unlike films such as Waking Life and A Scanner Darkly, which used the technique of rotoscoping to draw on top of live footage, Waltz With Bashir relied on animation drawn from scratch.

The 90-minute film was first shot with real participants and actors in a sound studio. A small team of animators and graphic designers then fused Flash with traditional hand-drawn animation, and added a few touches of 3D modeling.

Folman admitted to a few challenges in working with Flash, such as creating believable slow-movement scenes as opposed to fast-paced battles. But the filmmaker shrugged off common complaints about Flash’s user-friendly aspects.

“Well, at $600 for the software, we love it,” Folman told Animation World Magazine.

Film critics noted that the animation style effectively conveys the disjointed nature of Folman’s fragmented memories. The director himself mused that “there was no other way to do the film but animated,” turning an autobiographical documentary into an indelible experience.

Waltz With Bashir also comes as a highly relevant film at this time, given the ongoing clashes between Israel and the Palestinians. But the director expressed hope that the children born to his film’s crew would see Waltz as “an ancient video game that has nothing to do with their life whatsoever.”

Let us all hope. For a better sense of the film’s visual accomplishments, take a gander at the trailer below.