Bringing the Bowl to the Troops

Originally built for classified transmissions, the Global Broadcast Service has been turned to lighter uses 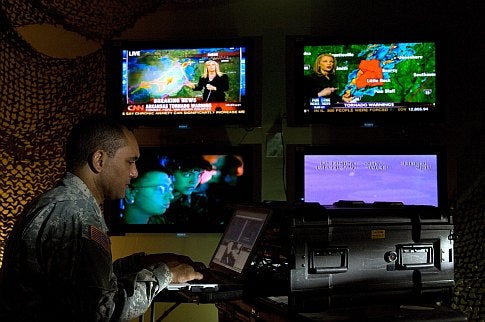 While you’re inhaling pigs in blankets and taking tequila shots for each touchdown, take a moment to appreciate the image you’re seeing. Not the 52-inch HD screen or the 3D advertisements, but the actual game footage of a frivolous event. In the military, they refer to such images as “morale” content, footage that can help them forget, for a moment, how far they are from home. But while the majority of our military based overseas can rely on the Armed Forces Network for live coverage of the big game, those stationed miles from the nearest network connection need a bit more technology to watch those images.

The Global Broadcast Service (or GBS) is “like satellite TV for the military,” said Raytheon vice president Guy DuBois. While it will provide a live feed of the Cardinals and Steelers this Sunday, it wasn’t the original intent of the technology.

According to DuBois, following the first Gulf War, General Norman Schwarzkopf demanded the military develop a new method for transmitting sensitive battlefield intelligence faster without tying up command control channels. Eleven years ago, in cooperation with the Air Force, Raytheon launched the GBS. Troops stationed in remote areas needed only a “receiver suite” that allowed the transmission of large quantities of data. Signals are broadcast from three locations (Hawaii, Virginia, and Italy) that communicate with satellites. The system still delivers sensitive information, along with educational courses, a 24-hour live feed of CNN and, in some cases, live sporting events.

DuBois claims that tens of thousands in the military will rely on the technology for game footage. They first started broadcasting the game several years ago, and the coverage has grown each year with more receiver suites, more channels and more satellites in the GBS system. Then entire Pacific fleet of subs and ships watched the game live last year (with no delay) and more are expected to do so this year. With growing bandwidth and multiple channels available, all the necessary data can still be delivered.

“There’s dozens of channels, so we won’t tie up any command control communication,” said DuBois. “They can switch from watching the game to the latest classified information.”

Remember that next time you’re complaining about the amount of commercials.

Follow popsci.com/puntsci for our countdown to Super Bowl XLIII coverage.