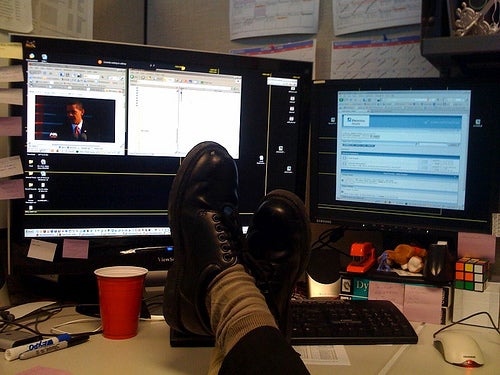 Sure, people said they were working during yesterday’s inauguration, but the Internet tells a different tale. It seems that a large portion of Americans actually stopped working and searching the Internet while Obama was speaking, and on the flip side, Twitter and Facebook shot through the roof.

Google, on its official blog, reported a substantial drop in queries lasting from the time Obama started taking the oath of office to the end of his speech. Similarly, the Merchant Circle, a company that helps small business expand their Web presence, noted a sharp decline in Web traffic while Obama was speaking.

But while Americans seemed to turn away from business, they turned towards social networks. Twitter reported five times as many tweets per second during Obama’s swearing in than the service usually records. This led to delays of up to five minutes, an eternity for a service used to delivering content in seconds. Facebook also saw a huge jump in use, reporting 4,000 status updates a minute during Obama’s speech.

The inauguration was also a boon for streaming video, the viewing of which reached its highest level ever during the speech. For some cable carriers, Internet traffic spiked by over 400 percent during the event, easily topping the record set last year during the US Open.

Once Obama finished his speech, and the poet Elizabeth Alexander began speaking, the traffic returned to normal. This, combined with footage of the crowds attempting to leave the Mall while Alexander spoke gave the impression that the poet was not as well received as the president. However, that may not be the case. According to data provided by Amazon.com spokesperson Sally Fouts, Alexander’s work, “Praise Song for the Day: A Poem for Barack Obama’s Presidential Inauguration”, jumped 2,878 precent in sales rank to 369, up from 10,990 earlier in the day.

So that’s what everyone did once they got back to work from watching the inauguration: they all started buying Obama-related merchandise.