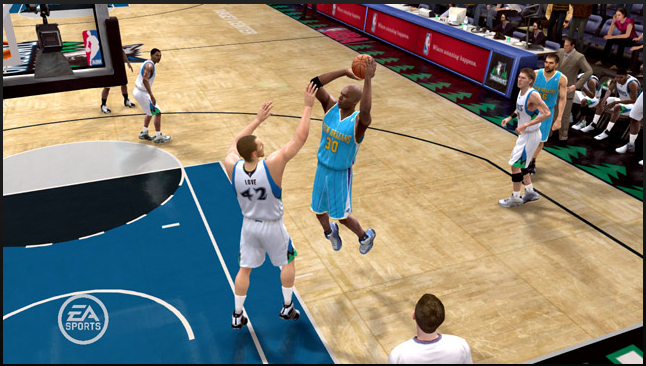 About half of NBA teams use the video game in their evaluation of rookies and possible trades, according to the Los Angeles Times. They say that the game allows them to assess new players based on early season statistics, as well as get a sense of how adding a player might change a team’s dynamic.

Sounds goofy, but consider the fact that _NBA Live 09_* boasts stats based on real-world player data. This latest version of the video game updates team rosters and player performance on a daily basis as the season progresses.

This also sounds less odd when looking at how statistics have already revolutionized how team managers look at their players in any number of sports. Baseball stats guru Bill James now crunches numbers for the Boston Red Sox, and Oakland Athletics general manager Billy Beane made “sabermetrics” mainstream by choosing overlooked players with strong stats such as on-base percentages.

Far from an escapist joyride, _NBA Live 09_actually represents an interactive statistics engine and simulator – an easily accessible and fun platform for playing with numbers. But NBA general managers are careful to note that it’s just one tool for evaluating their players.

“Simulation is great and will have a bigger and bigger place in the process,” said Daryl Morey, Houston Rockets general manager and professed admirer of Billy Beane, in his interview with the Los Angeles Times. Morey nevertheless cautioned that simulations can’t account for factors such as a player being tired from a late night out, or a player’s body language on the bench.

And statistical averages also have in-built limitations when it comes to predicting performances in specific games. EA Sports ran NBA Live 09 to simulate the 2008 NBA Finals between the Boston Celtics and LA Lakers, and predicted that the Lakers would win in the tiebreaking seventh game. Boston went on to take the series, four games to two.

*Note: the Los Angeles Times story refers to NBA Live 08, but most likely meant NBA Live 09 based on the game’s described features and the current season.