Microsoft's You're in the Movies makes you a Hollywood star 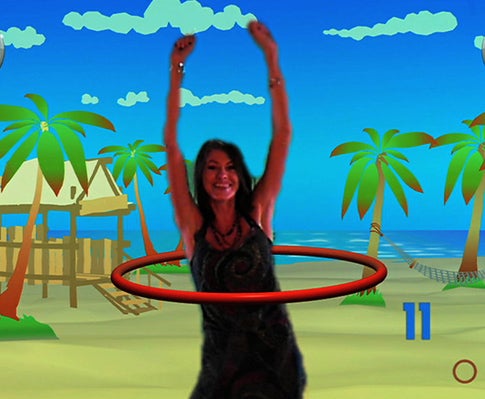 Meet today’s hottest new star. He’s short and balding, but has an infectious wit and smile that can light up any red carpet. Come to think of it, he looks a lot like me. My rapid rise to celebrity came courtesy of You’re in the Movies (Xbox 360), which inserts video from a USB camera into faux film trailers.

As a fan of Sony’s PlayStation Eye accessory, setup proved instantly familiar to me. I simply plugged the Xbox Live Vision Camera into the system’s USB port and was up and running. After adjusting a focus dial and turning up the room lights, I saw myself clearly on the TV screen.

Up to four people can participate in 40-plus mini-games, which had me and friends pantomiming such actions as running from rampaging monkeys, tugging ropes, and sprinting inside human-sized hamster wheels. Unfortunately, to ensure footage properly records, you have to keep your body and movements within the confines of miniscule on-screen silhouettes. An annoyingly-voiced director shouts out poses, i.e. holding your palm straight out, to strike between challenges. Once action sequences are completed, videos of our performances were automatically spliced into satirical clips based on sci-fi, horror, action, adventure and romance flicks.

Albeit a fun icebreaker, I quickly discovered that the game proves less box office blockbuster than straight-to-video novelty act. Blame grainy, low-res footage and a selection of challenges that isn’t particularly fun or long-lasting. It’s also tough to simultaneously focus on the action and keep your body within the outlined filming area. Images of live players, cut out from previously recorded action scenes, don’t mesh well with the sharper prerecorded backgrounds they are inserted into either. And game accuracy is dubious. No matter how far away I was when dodging flying chairs and megaphones, they always seemed to connect. Ouch.

Enjoyable as in-game dialogue and send-ups of Hollywood clichés prove, $70 is a lot to ask for the interactive equivalent of Mad Libs. That goes double for those without roommates. There is no online option to let you play with friends in other locations. For my next house party, I think I’ll still stick with Charades.