View to a Thrill 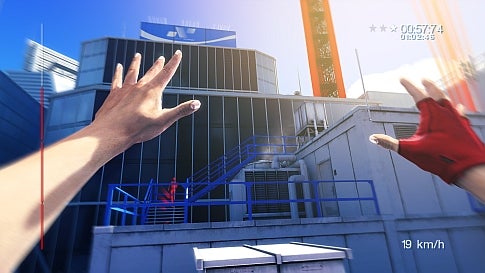 Shots ring out. Sirens split the air. Sunlight streaming on the city’s rooftops, you race towards freedom, breath exploding in your lungs, footsteps pounding on the concrete. Suddenly, you’ve nowhere left to run. Without thinking, you leap. And for the first time ever, in 3D adventure Mirror’s Edge (PC/PS3/Xbox 360), you’ll discover how the gymnastic maneuver pans out directly through its heroine’s eyes.

Call it parkour, freestyle walking, or simply playing urban acrobat. Splitting the difference between Prince of Persia‘s aerial platform-hopping and Getting Up‘s soaring high-rise backdrops, the game brings new perspective to clambering up skyscrapers and diving through shattering windows. Most of its rivals challenge you to single-handedly combat overwhelming odds. Here, staying in constant motion is the only way to survive. Just mind your step. The tale projects a palpable sense of urgency and vertigo as no forerunner has. Be thankful that the controller doesn’t vibrate when your desperate hurdles for dangling cranes or errant twirls off outstretched flagpoles end in cringe-inducing falls to the pavement.

The story, featuring courier Faith’s race to unravel a conspiracy in a dystopian world, is ironically best sped through. But wherever possible, savor the title’s uncanny ability to recreate the sensation of momentum and fluid movement. Miss a ledge, and your view dips perilously, only to violently jolt as your fingers suddenly find purchase on its edge. Charge sideways up walls to launch flying kicks or barrel shoulder-first into a door, and the screen shudders with the impact.

Don’t break for long, though. The difficulty’s high, between constant pressure from pursuers, obscure escape routes, and the inability to withstand multiple hits. Laden with cinematic chases and gravity-defying stunts, even frequent save points and optional hints won’t save you from shouting and hurling the controller. But in the Run, Lola, Run of gaming, we wouldn’t expect less. Here’s looking forward to seeing how many competitors it sends sprinting off to experiment further with the genre.