Fear and Loathing in the Online Office Suite

Wherein The Grouse tries to save some dough by abandoning Word 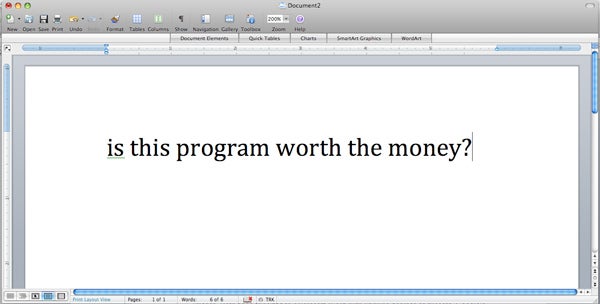 As part of my ongoing, personal economic bailout plan, this week I began tinkering around with a couple of the free, online office suites that are available. After all, why shell out a few hundred clams for Microsoft Office when others are giving it away for free? Unfortunately, after a week of getting to know Google Docs and Zoho Writer, here I am typing this week’s column from the comfort and safety of a bought-and-paid-for copy of Microsoft Word. Why? Because I came to realize something about myself over the course of this week: At 30 years old, I’m already an old fart.

More on that later.

The week’s experiment went off like so: I used Firefox on a Mac to put Google Docs and Zoho Writer through their respective paces. I played around with their Excel and PowerPoint equivalents as well, but I don’t often use those programs anyway, so I concentrated more on the word processors. I also gave Microsoft Live Office a whirl, but without the ability to actually edit or create documents, the word “useless” doesn’t even begin to describe the Microsoft experience. So, I won’t be mentioning it from here on out.

The first thing that struck me about the Google and Zoho apps is that they’re absolutely bulging with features. Just like in Word, you can create docs, type text, style it however you want, insert and resize images, add tables, do bulleted lists and print. Both make it a snap to share and collaborate with others, and both allow you to work offline via Google Gears. Google Docs even places a nifty little shortcut icon on your desktop, which goes a long way to making it feel like you’re using a “real” program, for lack of a better word. (Zoho also puts a shortcut on your desktop, but it’s a generic bookmark). Both programs let you import and export a variety of document formats, including Word, OpenDocument, RTF and PDF. Zoho even supports Microsoft’s new .docx format. They also allow you to use familiar keyboard shortcuts, such as Ctrl+S, Ctrl+P and good old Ctrl+Z.

Of course, neither app is without its problems. Zoho, for example, has a “thesaurus” function, but I can’t figure out for the life of me how to actually sub in a word short of manually cutting and pasting it in. Zoho also removed random spaces here and there in some of the docs I imported. Google, on the other hand, doesn’t have the ruler up top for adjusting margins (at least, I couldn’t locate it) and doesn’t support adding links to images. Both apps exported to Microsoft Word with varying degrees of success. Google’s tabbing and image alignment was slightly off, while Zoho placed some hideous, un-editable lines at the top and bottom of every document I exported. Ideally, Microsoft Word would never have to enter the picture, but let’s be realistic: When I submit an invoice to someone or file a story with my editor, am I going to send an invitation to view the file on Zoho, or am I just going to send through a Word doc?

For both Google and Zoho, the offline experiences leave a lot to be desired. The spreadsheet and slideshow programs aren’t made available offline by either—just the word processor, which itself has been severely crippled in both cases. Neither lets me create a new document offline, nor can I spell check an existing one. In Zoho Writer, images I’ve placed into documents are sometimes stripped out when in offline mode, which is completely frustrating. My biggest problem with offline mode is that I have no idea where my documents actually are. They seem to exist only within my browser window, and with the export function unavailable I have no way of backing them up or putting them on a thumb drive to share with a friend (Remember, I’m offline, so can’t email them).

These are all pretty small qualms, though, and ones I’m sure will be smoothed out in the coming months or years. In reality, the depth of features made available by both office suites is nothing short of incredible. Take a spin on Zoho’s PowerPoint counterpart, Show, and it doesn’t take a crystal ball to see that these online apps are the future.

Still, I’m not sold, and it’s my own frame of mind that’s to blame. For me to completely abandon Microsoft Office would require a major shift in the way I think about personal computing—one I’m not sure I’m capable of making. For me, the PC and the Internet are still two very distinct entities. I don’t think kids growing up today can even conceive of a computer that doesn’t go online. For them, there’s little difference between typing a paper in Microsoft Word and typing search terms into Google. It’s all the same playing field. I’m the opposite, and maybe that’s because I remember the day my family got its first 14.4-baud modem. Even though opening Firefox, IE or Safari is now as seamless a process as opening up Word or Excel, I still think of “going online” as something completely separate to what’s happening on my PC locally.

I like having the computing power on my actual computer. With Microsoft Word, Adobe Photoshop and whatever else I have installed, I feel like I can get things done whether I have an Internet connection or not. I also like my documents in a folder that I always have immediate access to. I really can’t imagine a future in which I’m required to go online to run a program or retrieve a document. And, what about outages? This past summer, Gmail suffered a major system-wide collapse, which left me without email or access to my contacts for hours. The same thing happened just yesterday to my Hotmail account—and yes, I really do still have a Hotmail account. If the same thing happened to Zoho and I suddenly couldn’t get a hold of an important story or presentation, I’d flip out. And there’s that whole issue of privacy. I’m sorry, but I’m not sure I want the Excel sheet I keep all of my finances on sitting out on some server somewhere, or being sent across the Internet into a Web browser.

If all of this makes me old school, so be it. Now, excuse me while I chase the neighborhood kids off of my lawn…