Forget Death: Scrubs Is On!

Studies shed new light on human happiness, the fear of death, and Britney 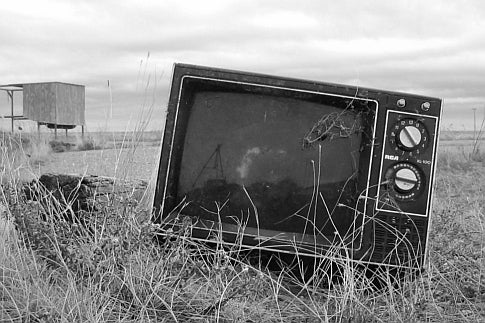 Two studies have come out in the last two weeks that have me seriously re-evaluating my life. The University of Maryland just released a study in which they asked the question, “Are happy or unhappy people more attracted to TV?” The second study, from the University of Illinois at Urbana-Champaign, informs us that an obsession with celebrity gossip reduces our fear of death. I watch a lot of TV and I have The Hollywood Gossip bookmarked, so now I’m wondering if I’m an unhappy person who thinks she’ll live forever.

Professors John Robinson and Steven Martin from the University of Maryland surveyed almost 30,000 adults, and their research showed that unhappy people watched significantly more television than happy people. Happy people chose to spend their time reading newspapers, attending religious services, and voting more. Honestly. Call me shallow, but I’d rather spend an afternoon watching Charles in Charge than waiting in line to vote.

In other news, Perez Hilton can help us overcome our fear of death. According to Pelin Kesebir and Chi-Yue Chiu of the University of Illinois, the celebrity gossip industry allows us to identify with celebrities (Britney drinks at Starbucks! I drink at Starbucks!), and by extension to believe that we, like celebrities, will be remembered after we pass on. A separate study revealed that people believe a plane is less likely to crash if there’s a celebrity on board, as long as the celeb is one who represents their cultural values. Better watch out, Marilyn Manson. Additionally, those surveyed believe that the more iconic the figure on the plane, the greater their protective force. Of course, no one has mentioned this to science, engineering, and gravity, but I’m sure the forces of nature make exceptions for Scarlett Johansson.

If we actually sat down and thought about all the terrible things that could happen to us, we’d never do anything. However, seeing little Suri Cruise out fearlessly walking the streets of New York with her mom and eight bodyguards helps us think, “I could be out walking those streets without fear,” and that’s important. After all, she’s the spawn of Hollywood royalty, so nothing bad can ever happen to her…