The Physics of Batman 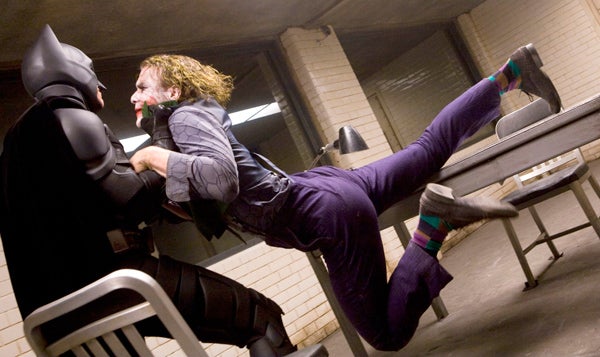 With The Dark Knight, the action-infused sequel to Batman Begins, dominating the box office in recent weeks, it’s clear that the revitalization of the new Batman franchise is no fantasy. In my opinion, The Dark Knight doesn’t quite come up to the level of its predecessor—its relentless action sequences left me a bit numb after a while, and the constant quick cutting in these scenes gives the audience too much to absorb all at once. Nevertheless, it’s got some very good performances (notably, the late Heath Ledger’s much acclaimed portrayal of the psychopathic Joker), an intricate plot and dramatic psychological conflict.

Meanwhile, the action sequences, and the use of technological gadgetry are on par with a James Bond movie, and The Dark Knight provides an ample springboard to apply some Hollywood physics. There are so many chases, collisions, jumps, flights and explosions it’s easy to highlight a few of these for some exciting physical analysis. We’ll also take a look at some of the fancy gadgets and discuss the physics (or lack thereof) behind them: There’s a lot there. So let’s highlight some relevant scenes.

Click here to delve into “The Physics of Batman.”