Enhancing Corporeal Security By Listening In On Bacterial “Chatter”

Microbial signals can warn our bodies of a possible attack 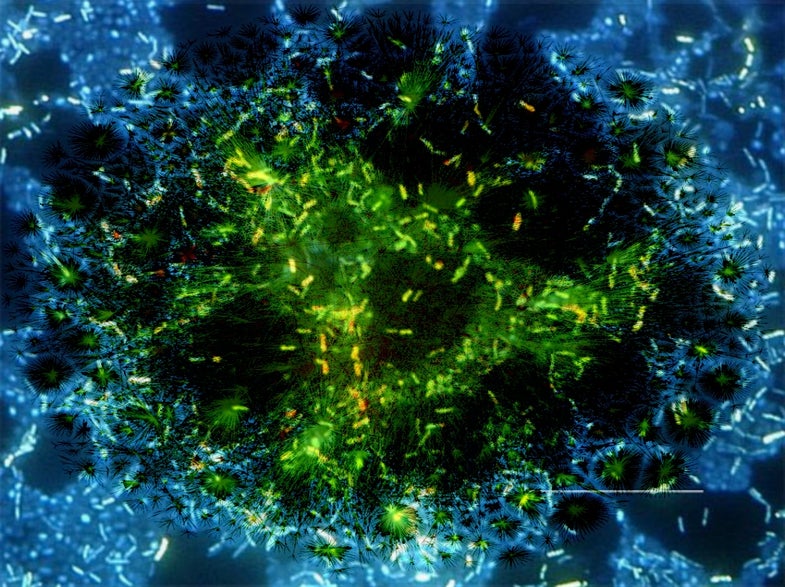 Surveillance is one of the most effective ways to maintain overall public safety. By learning about the activities in the environment, one can assess the potential for threats to be realized as well as get a handle on any growing concerns. Even the public can get involved through the concept of ‘see something, say something.’ Although in many cases action may not be necessary, those put in charge to protect us can be sure to be on the ready just in case.

In our bodies, we have a similar system for protection against pathogens. The immune system plays a primary role as it is the military defense mechanism against infectious disease. Yet, other cells can also join in the watch. For example, epithelial cells, which make up the lining of any part of our body exposed to the environment, have several antennae – receptors – to pick up on any signals and send out either messages of calm or alarm.

Over the last two decades, the signals leading to concern have been studied in several bacteria. Many of them, such as toxins and short-chain fatty acids, happen to have direct interaction with our cells in order to relay messages of peace or war. But these only make up a few of the widespread chemicals produced and released. Several other chemicals may either be ignored or misinterpreted.

One form of microbial chatter is known as quorum sensing (QS). Chemicals are released by bacteria in order to provide an indication of the environment and whether it is safe to continue growing, start holding back or get out of town. When first discovered, these QS molecules were thought to be completely independent of our own bodily functions. But over time, research showed some signals could either contribute to pathogenicity or at least be associated with an incoming threat.

Some QS mechanisms are mediated by a group of chemicals called autoinducers. There are several different forms of these molecules and many have been given much study. In terms of pathogenicity, one of the most intriguing is Autoinducer 2 (AI-2). Originally thought to be involved in the formation of microbial colonies, studies in Escherichia coli reveal this is only part of the picture. Through analysis of AI-2 stimulus, several hundred genes in the bacteria are affected leading to changes in everything from motility to the development of infection-aiding molecules. When AI-2 is present, lots will happen, including trouble such as infection.

With all this chatter going on, our bodies would serve well to have the ability to listen in and assess the situation. It seems, thankfully, we can. Last week, a group of American researchers released their observations of our epithelial cells’ ability to sense AI-2 chatter and what it meant for our overall surveillance system.

The team used nonpathogenic E. coli strains to determine the effect of AI-2 in a not-quite-so-threatening environment. After growing up the bacteria, they then added them to a known human epithelial laboratory cell line called HCT-8. This enabled the authors to examine what might happen in the colon without actually requiring any human test subjects. Although they expected some response, what happened took them by surprise. Between 481 and 542 genes in the human cells were affected.

Upon closer analysis, some of the stimulated genes were not useful in the context of surveillance such as cell renewal and tissue structure. But those involved in signaling the immune system of a threat were not only identified but given a closer inspection. What the authors found suggested even though these bacteria posed no threat, they apparently were active enough to concern the cells to prepare for an invasion.

Here’s where the most interesting information was gained. Although the genes themselves were turned on, meaning they were transcribed into RNA, some never actually translated; they never formed the final protein product. One of the most critical was the molecule Interleukin 8 (Il-8). This is a major part of the inflammatory response and signals the combat troops of the immune system, neutrophils, to come and take care of business. In essence, the epithelial cells were observing the situation but were not yet ready to act on the concern. Presumably, another signal would have to trigger a real response although this wasn’t tested.

With this in hand, the team aimed to see if AI-2 on its own could do the same. Sure enough, that change in gene production happened quickly, within a few hours of exposure. But then it waned and by 24 hours, everything returned to normal. This meant the bacterial signal could send the cells into a heightened state of security yet somehow needed to be sustained over time to maintain that worry. As there was no action associated with the fear, the cells simply kept on living their lives.

The information gained from this study offer more information on the ability of our bodies to detect signals from potential threats and to develop a surveillance system. While the mechanisms are still being elucidated, we at least know our cells can sense of an impending attack and be on the ready to signal for defensive forces. Whether or not this has actually meant in the prevention of infections is unknown yet it is good to know we at least have our own form of homeland security in place.