Report: Americans Were Unscientific Jerks About The Ebola Outbreak

On quarantines, travel bans, and other iffy preventative measures 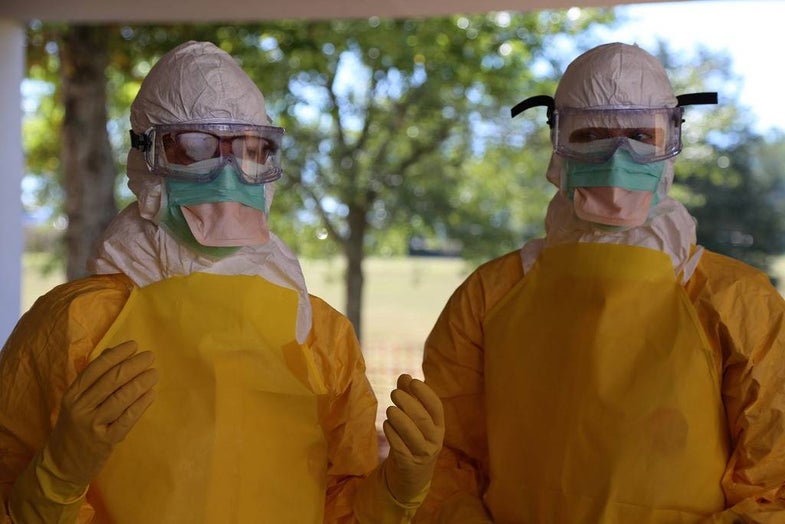 Five months after the U.S. had its first case of Ebola, ethicists have some pointed criticisms for states, such as New York, New Jersey, and Illinois, which forced volunteer nurses and doctors returning from West Africa to go into quarantine.

“Not allowing healthcare providers to do their work is not only morally wrong, it unreasonably restricts their basic freedom. It actually has the effect of not allowing them to save people’s lives,” Amy Gutmann, the chair of the U.S. Presidential Commission for the Study of Bioethical Issues, said during a recent conference call.

“The recommendation that the commission makes, going forward of course, is quarantine needs to be advised by the best science possible,” said James Wagner, the commission’s vice chair. When Popular Science asked about New York and New Jersey’s attempts to implement mandatory 21-day quarantines, Wagner noted, “It doesn’t appear in the cases you talked through that science was taken into consideration.”

“It doesn’t appear that science was taken into consideration.”

This isn’t the first time experts have lambasted the U.S. quarantines related to Ebola. Quarantines shouldn’t have applied to people without Ebola symptoms, because Ebola isn’t contagious until people start getting fevers and headaches. But as the epidemic has clearly bypassed the U.S.–only two people ever contracted Ebola on American soil–the Commission for the Study of Bioethical Issues is taking a step back. It’s reviewing whether the country made the right choices last fall and winter. Today, it published a report with recommendations for America to do better during the next public health emergency.

Besides unscientific quarantines, the commission also tackled Ebola-related travel bans, which became politically popular last fall. As others have reported, bans can actually be counterproductive, because they encourage people to travel through unofficial channels, where they can’t be tracked as easily. They also make it harder to fight the epidemic itself. By making it more difficult to travel, health care workers have a harder time getting to places where they are needed the most.

The commission’s report even includes cases of discrimination against first- and second-generation African immigrants to the U.S. “I was in the street [when a guy saw] me, yelling at me, ‘Take yourself back to Africa with your Ebola virus!'” the report quotes Oretha Bestman-Yates, the president of the Staten Island Liberian Community Association.

During epidemics, U.S. health agencies and journalists need to get the real science out there quickly and repeatedly, Gutmann says. One way to do this? Gutmann’s commission is recommending one person, such as the secretary of the Department of Health and Human Services, coordinate the country’s public health emergency responses from now on.