It could go up in May or June 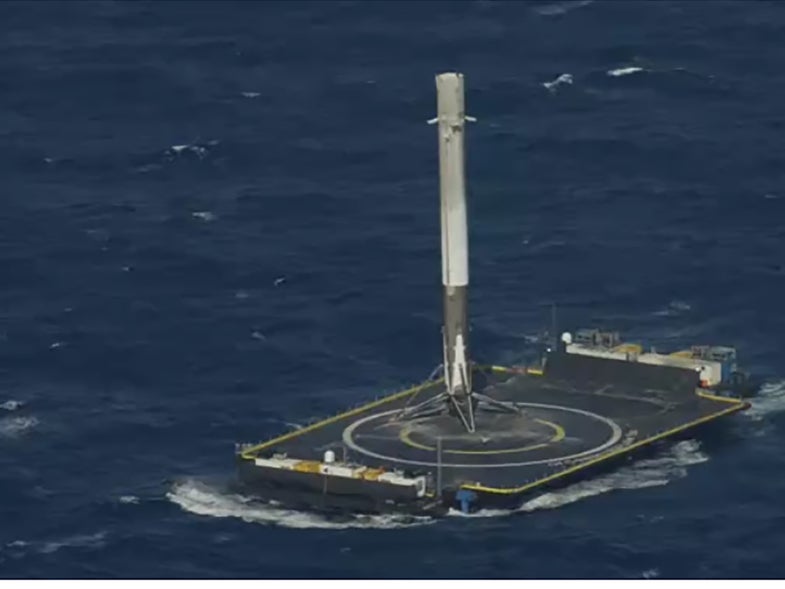 The Falcon 9 rocket successfully landed on the droneship Of Course I Still Love You. SpaceX
SHARE

SpaceX hit a huge milestone today. For more than a year, the private spaceflight company has been attempting to land its rocket boosters on a drone ship in the ocean, and today they finally did it.

Landing the rocket boosters is key to being able to reuse them, cutting millions of dollars off of launch costs in the process. The cost to construct the Falcon 9 is about $60 million, compared to just a few thousand dollars to refuel it. There would be some costs to inspect, repair, and clean the rocket to ensure it’s safe to fly, but Musk thinks each booster could potentially be used 10 to 20, or in some cases up to 100 times.

And while SpaceX’s first recovered rocket, which landed on solid ground, will likely be installed as a monument at the company’s headquarters, Musk says they hope to fly this one again. It’ll be the first time SpaceX has flown a used rocket.

Competitor Blue Origin is already reusing its rocket, but the booster doesn’t travel nearly as high or as fast as the Falcon 9. It’s intended to carry tourists into suborbital space, whereas SpaceX flies into low Earth orbit to deliver supplies to the International Space Station, as well as the higher geosynchronous orbit to drop off satellites.

Over the coming days, SpaceX will bring the rocket in to port and then perform about 10 static test fires of the rocket, to make sure it still works. If everything works properly, it could fly again as soon as May or June, and potentially with a paying customer. Eventually the company would like the turnaround time between launches to be more like a few weeks rather than months.

If the company can land and reuse its boosters on a reliable basis, that could cut the cost of rocket launches by 100-fold, says Musk.