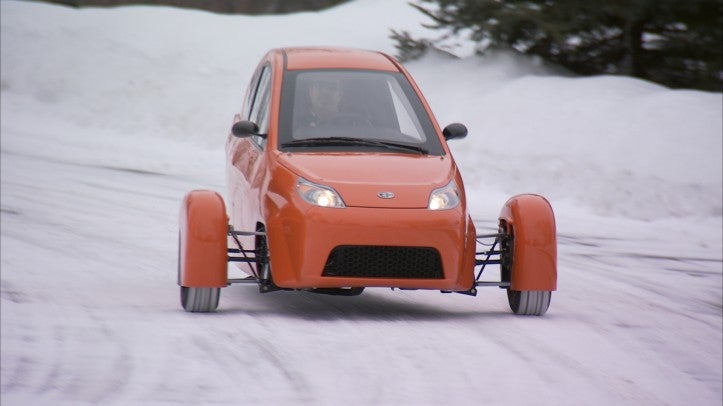 Ever since Paul Elio founded Elio Motors in 2008, the company has popped up in the news a few times a year. Sometimes it’s to hail the startup’s three-wheeled vehicles as an innovative solution for urban transportation and sometimes to predict the fledgling company’s imminent demise. But there’s no demise in sight yet, and now Elio Motors has made the Los Angeles Auto Show’s 2015 Top 10 Automotive Startups list and will be featured at the Connected Car Expo on November 17. Elio is the only auto maker; other honorees include a drunk driving prevention system, a car sharing company, and speech recognition software.

So what is this the vehicle Forbes.com recently called “the most revolutionary car since the Tesla Model S”? It starts with three wheels and a funky two-person cockpit with a .9-liter 3-cylinder engine good for 55 hp. But since the vehicle is so small, that translates to a 100-mph top speed and a 672-mile range, thanks to an expected 84 mpg.

It’s not completely without creature comforts and safety features, like power windows and locks, air conditioning, and the required airbags and ABS, plus stability control. All this quirky commuting can be yours for a projected $6,800.

The company is planning to build these cars in a former GM plant that made Hummers in Shreveport, LA, adding about 1500 jobs to the area. For now, the prototypes are being built in Detroit, where all of the suppliers are located. Production has been pushed back several times, with a target date now of late 2016.

If you’d like to check one out for yourself, Elio Motors has a prototype, P4, painted in Creamsicle that’s making the rounds. You can even be one of the more than 45,000 who have already plunked down at least $100 as a reservation for an Elio of their very own.