The prototype is three times as powerful as last year's entry 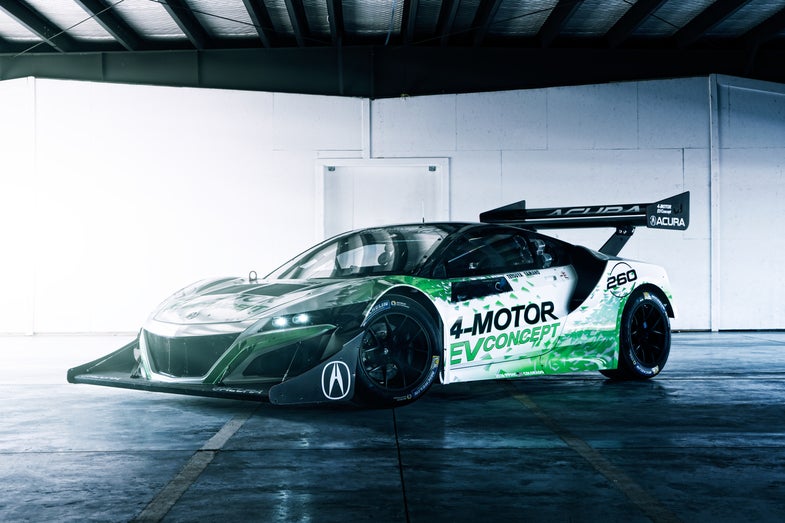 Acura NSX fans will have three competitors to cheer on at the 100th running of the Broadmoor Pikes Peak International Hill Climb this weekend. Brothers James and Nick Robinson, from the company’s engineering team, will pilot a pair of the supercars in the Time Attack 1 and 2 classes. But the more interesting race car might be the NSX-inspired all-electric prototype car driven by Tetsuya Yamano in the Electric Modified Class.

The concept car has four motors on board and electric Super Handling All-Wheel Drive, or SH-AWD, as Acura calls it. The AWD system allows for independent torque allocation at each wheel, which could come in handy in a race with 156 corners. Two separate Twin Motor Units (TMUs) are mounted on the axles to provide that precise four-wheel torque vectoring and the power necessary to climb 12.42 miles to an altitude of more than 14,000 feet.

Yamano reached the top of the peak last year in an experimental electric Honda CR-Z in the Challenge Exhibition Class — where he turned in the fastest time, 10:23.829. The powertrain technology has been further developed over the past year to produce three times the system output of last year’s CR-Z. Not to mention that it’s been dropped into the NSX supercar.

It’s interesting to note that electric vehicles have an advantage when racing at altitude. At 14,000 feet, the air is pretty thin, and internal combustion engines require oxygen to make that combustion happen and produce power. When the available oxygen drops, those vehicles lose about 30% of their power. Electric motors don’t combust to create power, so as long as they have the wattage, they won’t lose speed as they climb Pikes Peak.