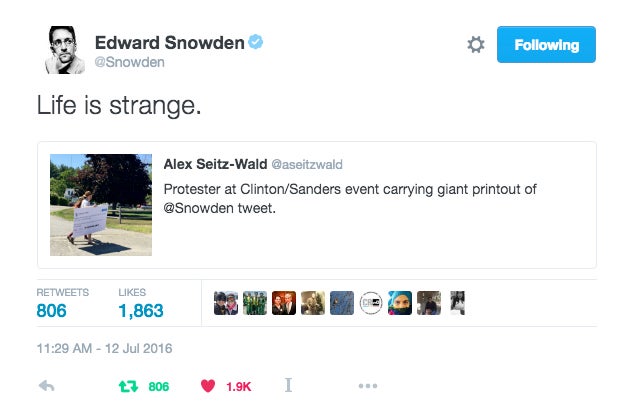 It’s no secret that NSA whistleblower/classified information leaker Edward Snowden isn’t the biggest fan of Democratic presidential candidate Hillary Clinton. On June 1, apparently in response to the FBI’s investigation into Hillary Clinton over her use of a personal email server for government business as Secretary of State, Snowden tweeted “Break classification rules for the public’s benefit, and you could be exiled. Do it for personal benefit, and you could be President.”

Today, a protester showed up to the joint event with Hillary Clinton and her one-time Democratic presidential rival Senator Bernie Sanders bearing a printout of this exact Snowden tweet. A journalist captured a photo of the protester and tweeted it, which did not go unnoticed by Snowden, who himself tweeted: “Life is strange.”

Also, this brings a whole new meaning to the once trendy phrase “RLRT (real-life retweet).”