‘Climate Corridors’ Could Save Wildlife 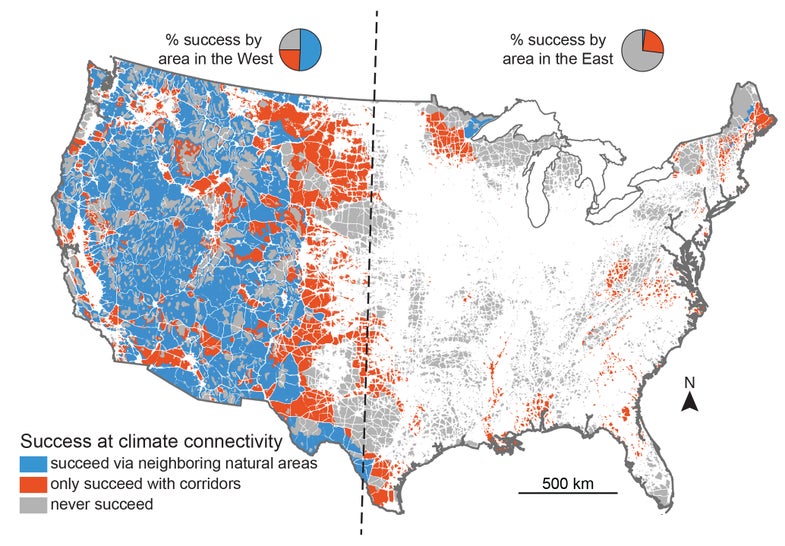 While humans have adapted to live just about anywhere, many animals aren’t the same habitat generalists that we are, and changes to their habitats, including rising temperatures, might have some plants and animals heading for the hills (or at least the cooler temperatures) in the next 50 years.

In a paper published today in the Proceedings of the National Academy of Sciences, researchers found that while the western United States offers wildlife ample room to roam as necessary, the eastern United States is incredibly fragmented, meaning animals and plants across the East Coast have no escape route if climate change continues to push temperatures in their habitats up past habitable levels.

Often these barriers are agricultural fields, superhighways, and other features that make life easier for humans, but present barriers to other life on Earth. The answer? Create climate corridors throughout the Eastern part of the country, preserving or planting natural areas and building bridges over busy, impassable roads.

The idea of creating habitat corridors isn’t new, but it is starting to pick up steam around the world. In Norway, Oslo has created a bee highway to allow pollinators to move freely across the metropolis. Researchers in the United States are working on tunnels to help small amphibians cross busy roads and avoid the fate of their relatives in Frogger.

Building bridges won’t help all species, but it might help enough to make a substantial difference to biodiversity on the East Coast, improving climate connectivity in he area by as much as 65 percent.

“Not all plants and animals will have to move,” said Jenny McGuire, lead author of the paper. “There is a subset of them that will be able to hunker down where they are. There will be some species that are really widespread and will end up just having some population losses. But especially for species that have smaller ranges, there will be some loss of biodiversity as they are unable to jump across agricultural fields or major roadways.”