How green are aerosol cans now, with chlorofluorocarbons out of the picture? 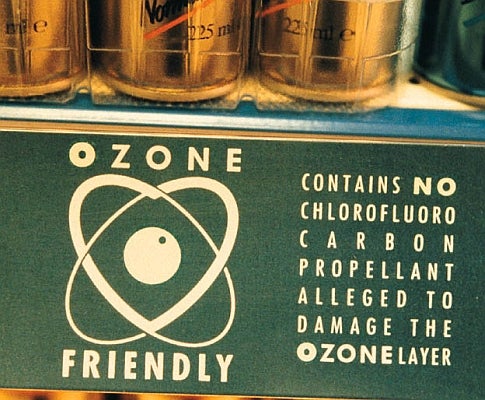 Dear EarthTalk: What’s the deal nowadays with aerosol spray cans? I thought that the ozone-depleting chemicals used in them were eliminated back in the 1970s. Is this true? If so, what is now used as a propellant? Are aerosols still bad for the ozone layer? — Sheila, Abilene, TX

The aerosol spray can has a storied history in the United States. It was first invented in the 1920s by U.S. Department of Agriculture scientists to pressurize insect spray. American soldiers eventually used the technology to help ward off malaria in the South Pacific during World War II. The aerosol spray cans today, while much smaller and more refined, are direct descendents of those original military-grade clunkers. Use of the cans for consumer applications took off during the ensuing decades, until the mid-1970s, when ozone depletion first came to the public’s attention.

As a result, consumer aerosol products made in the U.S. have not contained the ozone-depleting chemicals known as chlorofluorocarbons (CFCs) since the late 1970s — first because companies voluntarily eliminated them, and later because of federal regulations. Clean Air Act and U.S. Environmental Protection Agency (EPA) regulations further restricted the use of CFCs for non-consumer products. All consumer and most other aerosol products made or sold in the U.S. now use propellants—such as hydrocarbons and compressed gases like nitrous oxide—that do not deplete the ozone layer. Aerosol spray cans produced in some other countries might still utilize CFCs, but they cannot legally be sold in the U.S.

According to the industry trade group, the National Aerosol Association, aerosol manufacturers in Europe and other parts of the world initially did not follow the lead of U.S. industry in substituting alternative propellants for CFCs. “The fact that aerosols made in underdeveloped countries may contain CFCs has caused confusion in press reports and in the public mind about the stratospheric ozone/aerosol link,” reports the group. Other countries have also switched out ozone-depleting propellants with non-depleting forms because they signed 1987’s Montreal Protocol, a landmark international agreement signed by 191 countries with the goal of phasing out the production and use of CFCs and other ozone depleting chemicals. Scientists report that that the phase-out of the chemicals is now about 90 percent complete.

Of course, just because those deodorant sprays and shaving cream cans aren’t depleting the ozone layer doesn’t mean they are actually good for the environment. They still contain hydrocarbons and/or compressed gases notorious for their contribution to global warming. Every time you hit the button, then, you are raising your carbon footprint, albeit ever so slightly.